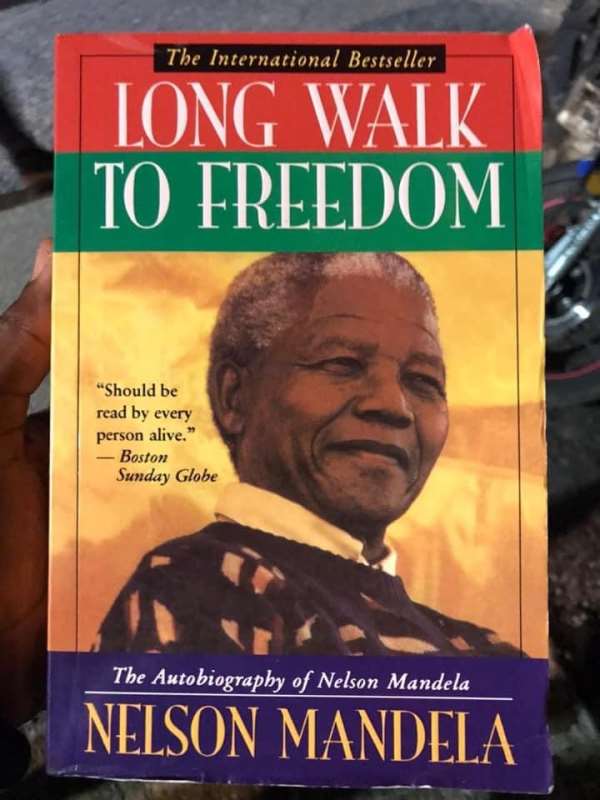 Saturday 18th July, 2020 was an auspicious day. It was a great day in the history of the world. It was the birthday of one of the greatest men to ever walk the surface of the earth. It was the birthday of a great African who fought against injustice, oppression and the robbing of the dignity of his people.
It was the birthday of the man that has monuments, flowers, roads and even postage stamps named after him. Forty-seven years ago, the physics department at Leeds University named a nuclear particle the 'Mandela particle'. In the Scientific world, a prehistoric woodpecker was named after him. It was given the name Australopicus Nelson Mandela. To make it short, Saturday was Mandela day.

I never met Nelson Mandela. I did not live in his time. Better to say he lived a bit in my time. The closest I ever came to him was an interaction I had with his Vice President, Thabo Mbeki when he came to Ghana in 2016. As a matter of fact Mandela was born one hundred and two years ago. Meaning he was already a septuagenarian before I breathed my first on this earth. But I had the chance to go through the great life he lived from his autobiography Long Walk to Freedom.

I had the opportunity to get some of his rigor; grit and greatness rub off my body when I read more than once the 630-page book of his life. This is aside the numerous biographies I had read about him. Suffice it to mention Mandela's Way: Lessons on Life, Courage and Love by Richard Stengel and Mandela,The Authorized Biography by Anthony Sampson.

The book (Long Walk to Freedom) was first published in 1994. He dedicated it to (in his words) “my six children, Madiba and Makaziwe (my first daughter) who are now deceased, and to Makgatho, Makaziwe, Zenani and Zindzi, whose support and love I treasure; to my twenty-one grandchildren and three great-grandchildren who give me great pleasure; and to all my comrades, friends and fellow South Africans whom I serve and whose courage, determination and patriotism remain my source of inspiration."

The book takes us through the roller coaster of his life, his struggles, his travails and triumphs. I first read it in 2008 and it is the book that bolstered the life of activism in me. The book, most importantly, teaches us how history chooses its heroes and heroines. Six years before Mandela was born, the African National Congress was founded.

On that fateful morning in Bloemfontein on January 8, 1912, as the founding fathers (Isaka Seme, Sol Paatje, Reverend John Dube, Thomas Mapikela, Walter Rubusana etc.) sang Enoch Sontonga's Nkosi Sikelel'iAfrica, little did they know that their task of winning political power for the Blacks will forever end up to be synonymous with a child yet to be born six years later in 1918.
Nelson Mandela came to meet stalwarts like Oliver Tambo, Albert Luthuli and the rest who initiated him into the struggle. The Ahmed Kathradas, the Robert Sobukwe Mangalisos, the Steve Bikos etc., yet he surpassed them all to become the one to bring Black South Africa into power. And his name is now symptomatic to the cause of ending Apartheid in South Africa. The rest are somehow forgotten but it is just that history chose Mandela.
The book lets us know that Mandela was born in royalty. An early marriage arrangement made him run away from all the luxuries of royalty to a life of struggle and poverty in Johannesburg. And that's where he found himself in what the Socialists term “the struggle." He stated in the autobiography that those days in South Africa, you will find yourself doing politics even if it was unintended. You go to the beach with your girlfriend to hangout and there was a “Whites only" section and “Black only" section.

Likewise on the buses. Likewise everywhere. And you will tend to protest; that's the politics. So he got swallowed into the politics of revolt against inhumanity, protest against injustice, the campaign against oppression and suppression. He joined the African National Congress which served as the vanguard political party that gave fillip to the struggle.

He was belligerent and bellicose and was a thorn in the flesh of the unjust government. He thought the leaders of the African National Congress then were too soft and nice with the apartheid government such that he helped in the formation of uMkhonto we Sizwe. uMkhonto we Sizwe (meaning Spear of the Nation) was the armed wing of the African National Congress co-founded by Nelson Mandela in the wake of the Sharpeville Massacre of 1956; where 69 peaceful protesters got murdered, including 8 women and 10 children, 180 injured, including 31 women and 19 children by the Apartheid police.
He stated his motivation for the formation of this armed-wing in the three-hour speech he delivered as a defendant at the Rivonia trial. He stated “at the beginning of June 1961, after a long and anxious assessment of the South African situation, I, and some colleagues, came to the conclusion that as violence in this country was inevitable, it would be unrealistic and wrong for African leaders to continue preaching peace and non-violence at a time when the government met our peaceful demands with force. This conclusion was not easily arrived at. It was only when all else had failed when all channels of peaceful protest had been barred to us, that the decision was made to embark on violent forms of political struggle, and to form uMkhonto we Sizwe. We did so not because we desired such a course, but solely because the government had left us with no other choice.”
He also hinted “I did not plan it in a spirit of recklessness, nor because I have any love for violence. I planned it as a result of a calm and sober assessment of the political situation that had arisen after many years of tyranny, exploitation, and oppression of my people by the whites.”
Nelson Mandela according to his autobiography became a fugitive and had to go into exile traveling to many countries including Ghana. He finally got imprisoned for twenty-seven years and spent his time boxing, reading, writing, organizing the ANC, further studying and improving the humanity of inmates, prison officials, and even those who convicted him. He came out and became the first-ever Black President of South Africa.
One can never count the number of books, articles written about him, the number of documentaries done on him, the number of tourists that throng the Robben Island just to catch a glimpse of where Nelson Mandela spent a score, and seven of his life. His place in the history of the world is well-assured with over 250 world honors to his name and held internationally as an icon of Social Justice, Democracy, and forgiveness.

The lessons one gets from this great book on this great son of Africa is well captured by the Canadian author, Robin Sharma. He states that the life of Mandela teaches us that “nothing is more important than building your inner architecture of undefeatability and greatness. Nothing is more important than strengthening your character, elevating your thinking, and releasing your fearful beliefs.

Nothing is more important than cleansing your heart of resentment and forgiving those who have wronged you. Nothing is more important than shifting from selfish to selfless–and donating the rest of your life to a mission that is bigger than yourself.” Poignant.
The only way you will get to know Mandela is through his numerous writings and numerous things written about him. So it is with everyone who wants to share a bit of his greatness.

Grab at least his autobiography and read. It is one of the things that will put you on the path of greatness. Our elders say he who paves the way for the great paves his own greatness. Read about Mandela.

Inusah Mohammed
[email protected]
NB: The Writer is a Youth-Activist and the Executive Secretary of Success Book