Mavis Finds Trouble @Kasoa: But what triggered her action? 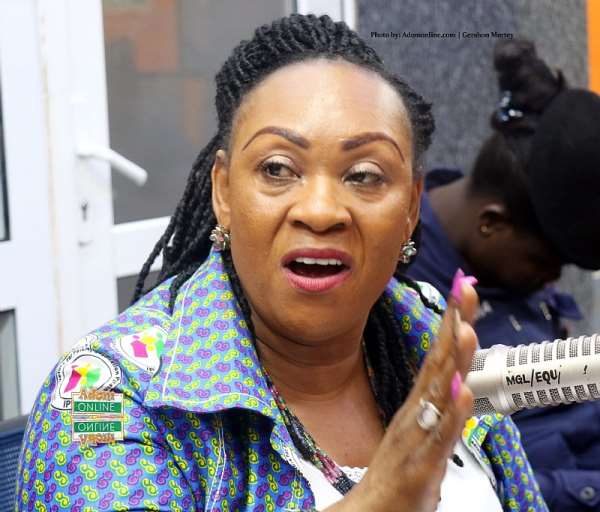 Have you met her yet?
Some people think she's trigger-happy. Is she?
There have been a wave of calls from security experts, civil society groups, religious leaders, policy think tanks and individuals. Indeed, deadlines for her resignation have been ringing loud from Monday to this day, amid vilification.

Mavis Hawa Koomson Minister for Special Development Initiatives is seen as a villain and an impulsive character. One unfit to hold herself out as a legislator and uncut to be a member of the ruling NPP.

"This woman is a disgrace to her party, to the president and to the republic. If we don't sack this woman the police will never be able to deal with anyone on vigilantism," says Professor Kwesi Aning, security expert.

He thinks the minister has undermined everything the president has done with vigilantism. I hold the view that this assertion is too broad because it's premature for one to come to such conclusion, given the fact that the case is at its fluid stage.

Motive
However, I should think, we need to focus more on motive and look critically into the issue (preferably conducting an investigation) rather than prescribing sanctions i.e resignation. In my view, the element of motive is crucial in this context. Motive deals with an individual's underlying reasons for committing say a crime.Thus, first, we need to establish if the Minister fired the warning shots because she feared or felt her life and that of her people were in danger. Maybe, she could have acted differently. Or maybe not per the circumstance that presented itself.

Which may include intent, since the two have often been used Interchangeably. Intent is concerned with one's willingness to carry out specific actions related to the offense.That brings me to the second point. Here one cannot avoid the following questions:

Who are the people that caused the pandemonium? Were they armed as being alleged? Is there evidence that they vandalised the registration centre and set ablaze three motorbikes?

Also the minister alleges that her opponent was bussing some foreigners to the centre to register, how true is this allegation?

Given the complexity of the case I think it calls for investigation and not resignation?

And I couldn't agree more with OccupyGhana--a civil society group. "We call on the police to quickly investigate the circumstances under which this incident occurred. If it's found that the minister breached the law, she should be prosecuted to the fullest extent possible under the law."

I also support calls that she must face disciplinary action from the house of the legislature.

Meanwhile, a Sierra Leonean social commentator based in Seattle, Washington, USA has shared his thoughts on the matter: According to Dr. Daniel Koroma the minister must be reprimanded and not pressured to resign.

"Reprimand her because she is probably a first time offender and not a repeat offender. She must ensure she has the appropriate security personnel at all times before appearing at such places especially where there is the potential for tensions to escalate..".

What triggered her action?
On Monday 20 July 2020 Madam Koomson, who is also the Member of Parliament for Awutu Senya East (Kasoa) constituency pulled her gun and fired warning shots. It's understood some brawny guys had stormed Christ registration centre at Kasoa with their guns drawn, vandalizing the registration centre.

According to reports, the electoral officials at the centre ran for their lives as three motorbikes were purportedly set ablaze by the said individuals. The minister fired warning shots to perhaps deter the guys numbering about 15 to cause more mayhem.

So was it the minister's shots that disrupted the exercise or the action that preceded the firing?

I'm referring to the alleged action by the 'hoodlums'?

What did the MP say?
The lawmaker told the media that she took the gun to the centre for personal protection in her attempt to stop the parliamentary candidate of the National Democratic Congress (NDC), Phyllis Naa Koryoo, from busing aliens to the area to register.

Mavis, why take such an action when the police are there?

I think you erred, but we all get carried away sometimes-- in making the right decisions.

Some social media users disagree with the minister on this approach too. They argue, she should have alerted the police and not take matters in her own hands. Is she trigger-happy?

“None of my men carried guns to the centre I fired the warning shots myself," she said.

I’m a Member of Parliament, I need to protect myself. It was at dawn; my police escort had not started work yet. So, that is the modus operandi I engaged in his absence."

Another eminent individual who has weighed in the bizarre incident since its eruption is the National Peace Council, chair Prof Emmanuel Asante. He wondered if firing the shots was the only option.

“Was pulling a gun the “only option” the minister had under the circumstances. Even if her bodyguard was not around, couldn’t she have gone to the police station to inform the police about what was happening? As far as I’m concerned, it cannot be justified in any sense”, he said.