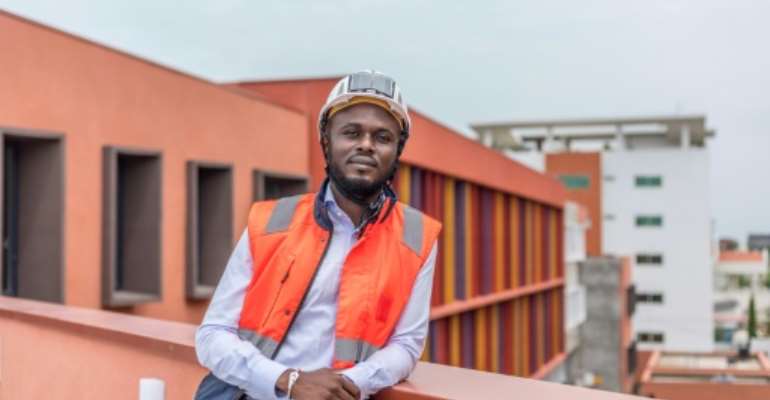 The new centre in Benin's economic capital is designed to be a cradle for researchers and tech entrepreneurs. By Yanick Folly (AFP)

With crimson walls and violet, yellow and red awnings, it's a building that few people in Cotonou, the tranquil economic capital of Benin, are likely to miss.

And that's the point. The bright colours of the Seme-One centre, designed to be a cradle for researchers and tech entrepreneurs, "arouse the senses and stimulate innovation", said Abdoul Halim Asouma, in charge of construction work.

Masons and painters are putting the finishing touches to the 4,250-square-metre (45,750-square-foot) building -- an area roughly equivalent to a hypermarket -- that seeks to be flexible in use, low in energy consumption and nurturing of ideas, talent and networking.

The site is part of Seme-City, a project that President Patrice Talon hopes will help turn his small West African country into a regional tech hotspot like Kenya or Rwanda, on the other side of the continent.

The centre has for the last two years been housed in premises adjoining the presidential residence -- as a hub for students, researchers, developers, the heads of companies large and small, and others who can work there and attend conferences.

For its director Claude Borna, Seme-City is "a unique place that supports and trains the talent of tomorrow, and which promotes innovation made in Africa".

Masons and painters have been putting the finishing touches on the building, which is roughly the size of a hypermarket. By Yanick Folly (AFP)

Borna studied in Los Angeles and Montreal, and for many years worked for international companies as a consultant on innovation and commercial strategy before returning to Benin in 2016.

"People come to Seme-City seeking potential colleagues, training and backing," said Borna, who is in her 40s.

"Young people are often full of ideas but lack the framework and the backup."

The spread of the COVID-19 pandemic to Benin makes fresh ideas even more welcome -- and above all, their rapid implementation.

Entrepreneurs at Seme-One have developed X-over, a mobile phone app that makes it possible to trace the chain of contacts made by a person infected with coronavirus. By Yanick Folly (AFP)

With financial support from the UN Population Fund (UNFPA) in Benin, 15 national and international organisations have created a task force to find ways of fighting the virus, in line with West African resources and needs.

Donald Tchaou, 29, and five of his friends developed X-over, an app that encourages social distancing and makes it possible to trace the chain of contacts made by an infected person.

While it is not the only program of its kind, developing the app in Benin saves money and strengthens local control over data.

Habib Meme, an architect, has been working with engineers and computer scientists to develop a project called COM-Finement, to make mobile medical facilities that can be swiftly erected or dismantled in an epidemic.

The facilities are interconnected and linked remotely to doctors who can provide expertise from afar.

In Seme-City, "they pointed us in the direction of potential financial donors and gave us highly relevant technical feedback," Meme said.

His innovation has won over several governments in West Africa and a number of prototypes are in an experimental phase, he said.

Habib Meme has been working to develop mobile medical facilities that can be swiftly erected or dismantled in an epidemic. By Yanick Folly (AFP)

Developing new projects and launching start-ups require not just funding, but partnerships and knowledge of marketing, laws and regulation.

Armelle Dossa, 25, a specialist in agri-tech, is working on a marketing project for organic vegetables.

"If this framework had existed in Benin 10 years ago, we would have many young entrepreneurs and a lower rate of unemployment," she said.