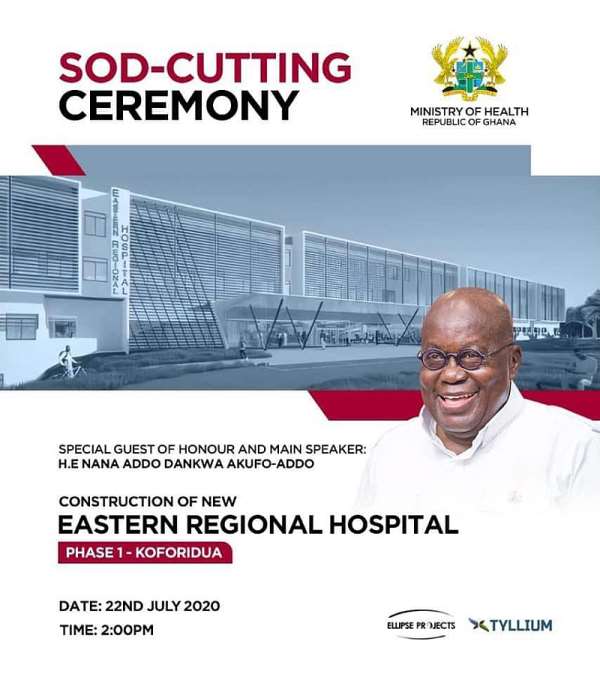 President Akufo-Addo on Wednesday afternoon, will hold a sod-cutting ceremony for the construction of the Eastern Regional Hospital.

The €70 million project, which will be the first phase, to be undertaken by Ellipse Projects and Tyllium will be located at Koforidua-Akwadum road.

President Akufo-Addo assured on Sunday, April 26, 2020 that the construction of the district hospitals will take one year to complete: “All these are expected to be completed within one year. Each of them will be a quality, standard design 100-bed hospital with accommodation for doctors, nurses, and other health workers and the intention is to complete them within a year,” the president said in one of his periodic updates on the fight against coronavirus.

President Akufo-Addo had indicated that his government will begin constructing 88 hospitals in the districts without hospitals and Eastern Region will benefit from eight of these projects in addition to the regional hospital.

Parliament has already approved a €56.1 million loan facility for the construction of 100-bed trauma hospitals at Obuasi and Anyinam as part of efforts to expand health care delivery in the country.

The government as part of the agreement will also build an Accident and Emergency center at Enyiresi Hospital and rehabilitate the Obuasi Health Centre.

The agreement is between the government of Ghana through the Finance Ministry and Deutsche Bank AG (as the arranger and original lender) and TMF Global Services (UK) Limited (as the facility arranger) to finance the project.

The hospitals will come with an 18-bed Accident and Emergency ward for adults, 12-bed ward for Paediatric Emergencies and a 100-seater capacity waiting area.