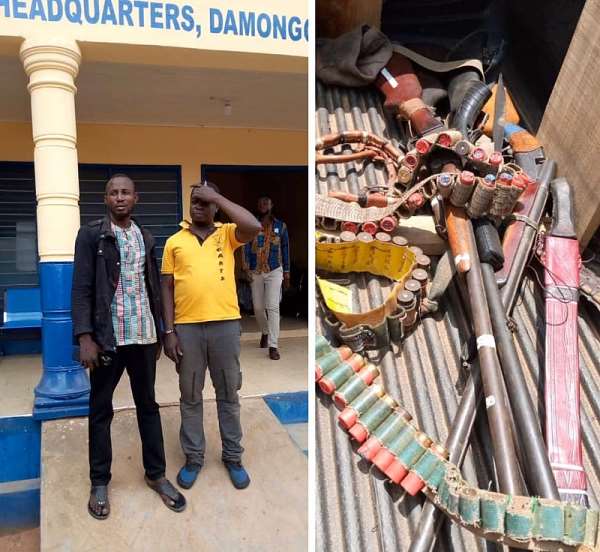 The Savannah Regional Police Command has nabbed two persons for illegal possession of firearm at Kojokora in the West Gonja district of the Savannah region.

DGN Online gathered that the suspects Inusah Iddisah and Salifu Abubakar claimed they were escorting the passengers to the registration centre with weapons due to the rampant robbery incidents in the area.

The suspects were arrested with guns , ammunition's and machetes.

The Savannah Regional Police Commander, DCOP Adetwum Bediako who confirmed the arrest to DGN Online said during interrogations, the suspects said they were using the weapons to protect the passengers by escorting them to the registration centre.

According to him, the suspects will be charged and arraigned before court after investigations.

The ruling New Patriotic Party(NPP) in the Savannah Region has accused the NDC for recruiting the suspects to escort the passengers to the registration centre to register them in the ongoing voters registration exercise.

The Savannah Regional Communication Director, Mohammed Issah claimed that upon an alert from the hardworking Damango Constituency Executives of the NPP, the Police and Military quickly moved in to arrest the NDC vigilante group.

“The NPP is and will remain law abiding citizens and will do nothing to disrupt the peace that is being enjoyed in the the Nana Addo created Savannah Region.”

“Such fake stories are capable of causing serious tensions in the region and we call on the security services, particularly the police to as a matter of urgency invite whoever is behind this false accusation for strict interrogation and hence be used as a scapegoat to deter others who may engage in such despicable acts in the near future.”

Don’t give literal meaning to Akufo-Addo’s response to Torbg...
10 minutes ago