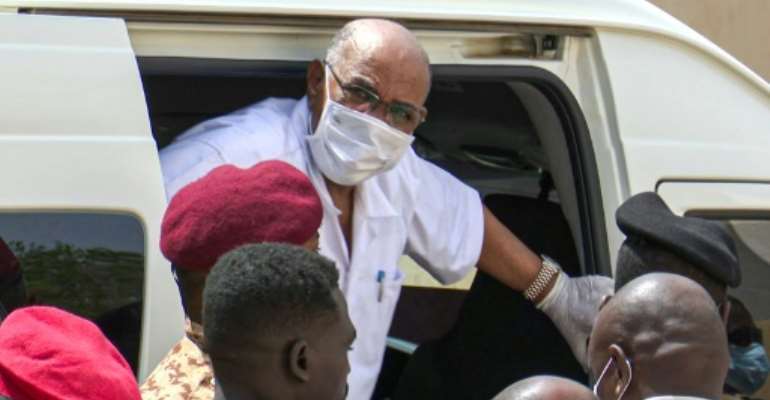 Sudan's ousted president Omar al-Bashir gets out of a car to attend his trial at a Khartoum court in this AFPTV image. By Mohammed ABUAMRAIN (AFP)

Sudan's former president Omar al-Bashir, ousted amid a popular pro-democracy uprising last year, went on trial Tuesday over the military coup that brought him to power more than three decades ago.

Bashir, 76, and his co-accused could face the death penalty if convicted over the 1989 Islamist-backed overthrow of the democratically elected government of prime minister Sadek al-Mahdi.

It is the first time in the Arab world's modern history that the architect of a coup is tried for plotting a putsch, although the man dubbed the true brain behind it, Hassan Turabi of the National Islamic Front, died in 2016.

Along with Bashir, 27 other men from the ousted regime were in the dock at the Khartoum court house, which was heavily guarded by police outside with AK-47 assault rifles, batons and tear gas grenades.

A vehicle carrying Bashir leaves the Khartoum courthouse in the Sudanese capital. By ASHRAF SHAZLY (AFP)

"This court will listen to each of them and we will give each of the 28 accused the opportunity to defend themselves," said the presiding judge, Issam al-Din Mohammad Ibrahim.

Bashir, who was kept with the other accused in a caged area of the courtroom, did not speak during the trial's opening session which ended after about one hour.

The judge said the court was not large enough to accommodate the more than 190 defence lawyers and adjourned the hearings until August 11.

Outside the courthouse, dozens of family members of the defendants noisily rallied against the trial, many shouting "Allahu Akbar (God is greatest)".

"They did not allow the majority of the families to attend the trial although we presented our requests three days ago," Mohammad Nafaa, the son of a former agriculture minister, told AFP.

The trial comes as Sudan's post-revolution transitional government has launched a series of reforms in hopes of fully rejoining the international community.

Sudan has also pledged in principle to hand over Bashir to the International Criminal Court to face trial on charges of war crimes and genocide in the Darfur conflict, which left 300,000 people dead and displaced 2.5 million in a scorched earth campaign against a 2003 insurgency.

One of the 27 co-accused at the trial of Bashir is pictured inside a caged area of the courthouse. By ASHRAF SHAZLY (AFP)

Also in the dock were Bashir's former vice presidents Ali Osman Taha and Bakri Hassan Saleh and several of his former ministers and governors.

They are accused of having plotted the June 30, 1989 bloodless coup in which the army arrested Sudan's political leaders, suspended parliament, closed the airport and announced the power grab on the radio.

Bashir stayed in power for 30 years before being overthrown on April 11, 2019 after several months of unprecedented, youth-led street demonstrations.

Until the end, the idiosyncratic leader with the trademark cane, sometimes known to dance at political rallies, had been defiant, angrily labelling the protesters "traitors" and "rats" that should "return to their holes".

In the 1990s, under his mentor Turabi, Bashir had steered Sudan -- a country with a plethora of tribes and then divided between the mainly Muslim north and Christian or animist south -- towards radical Islam.

Sudanese security forces deploy outside the Khartoum courthouse during the trial of Bashir and 27 co-accused. By ASHRAF SHAZLY (AFP)

For several years Khartoum hosted the Al-Qaeda leader Osama bin Laden before expelling him in 1996 under pressure from the United States. Bashir then shifted away from backing Islamist militants to improve relations with his opponents and neighbours.

It was under Bashir's rule that ethnically diverse Sudan saw the oil-rich south gain its independence in 2011 after two decades of conflict with the Arab Muslim north.

One of the army of defence lawyers, Hashem al-Gali, has charged that Bashir and the others would face "a political trial" being held "in a hostile environment".

Moaz Hadra, one of the lawyers who led the push to bring the case to court, told AFP he hoped the trial will help "safeguard Sudanese democracy. In this way, we hope to bring an end to the era of putsches in Sudan."

Family members of the accused rally against the trial outside the courthouse. By ASHRAF SHAZLY (AFP)

The trial comes as Sudan's joint civilian-military transitional government is introducing a host of reforms and has relaunched peace talks with rebel groups.

Khartoum hopes soon to be taken off the US State Department's list of countries that sponsor terrorism, a significant hurdle to receiving foreign aid and investment.