By Sebastian Smith, with AFP Bureaus 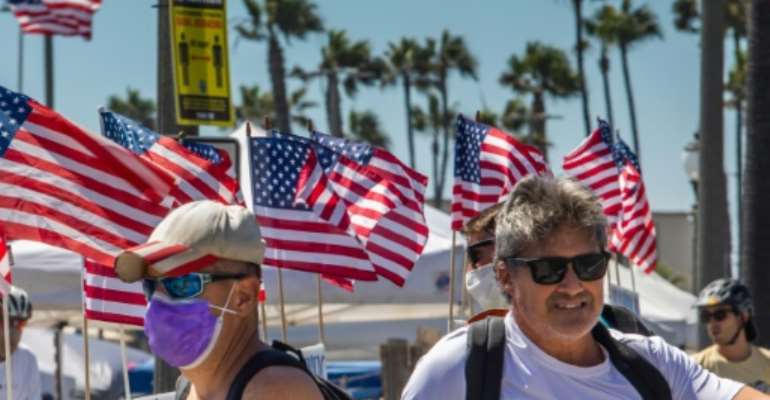 US President Donald Trump has come out in favor of face masks to fight the coronavirus after refusing to encourage them for months. By Apu GOMES (AFP)

President Donald Trump changed his tune in favor of face masks as a tool to combat the coronavirus in the United States, as European leaders on Tuesday agreed on a massive aid package for their pandemic-ravaged economies.

The virus has infected more than 14.6 million people and killed over 600,000 of them since it first emerged in China, with fresh alarm being sounded over its accelerating spread in Africa.

With no vaccine yet, countries are trying to combat the coronavirus through measures like social distancing, disinfection drives and face masks. By Jung Yeon-je (AFP)

And despite rising hopes for two vaccine candidates, there are few options available to combat the spread of COVID-19, though they do include face masks -- which Trump and his political allies refused to encourage for months.

But he changed direction on Monday, tweeting a photo of himself wearing a mask with the message: "We are United in our effort to defeat the Invisible China Virus, and many people say that it is Patriotic to wear a face mask when you can't socially distance."

The deadly coronavirus has infected more than 14.6 million people around the world. By PEDRO PARDO (AFP)

"There is nobody more Patriotic than me, your favorite President!"

US authorities are struggling to handle the crisis as infections surge towards four million, with more than 140,000 deaths, and Trump has been slammed for his management of the crisis.

The president is scrambling to respond to public anger just over 100 days from the November election, with the human toll rising and the US economy devastated.

Latin America is one of the regions hardest hit by the pandemic. By Johan ORDONEZ (AFP)

Tens of millions of Americans have been left jobless, and the extra unemployment benefits keeping some from poverty are set to expire at the end of July.

"I'm still struggling to pay the bills and I'm still looking for a job," said Diana Yitbarek, 44, who has been unemployed since April.

"And nowadays it's hard to find a job because everything is closed."

Across the Atlantic, European leaders agreed on a landmark stimulus package worth 750 billion euros ($858 billion) to help pull the bloc out of the deepest recession in its history.

European Union leaders have agreed on a massive coronavirus recovery plan after a fractious summit. By JOHN THYS (POOL/AFP)

The package will send tens of billions of euros to countries hit hardest by the virus, most notably heavily indebted Spain and Italy that had lobbied hard for a major gesture from their EU partners.

"Deal!" tweeted EU Council Chief Charles Michel, whose job was to guide the talks, which saw strong resistance from some countries against sending money to nations they consider too lax with public spending.

With even richer nations struggling, experts have warned that the impact would be harshest in poorer regions of the world like Africa.

There are fresh concerns about the continent, particularly South Africa, where the death toll crossed 5,000 over the weekend.

There are fresh concerns about the spread of the coronavirus accelerating in Africa. By RIJASOLO (AFP)

The South Africa situation could be "a warning" for the rest of the continent, the World Health Organization's emergency chief Michael Ryan said.

"I am very concerned right now that we are beginning to see an acceleration of disease in Africa," he added.

Latin America has already been hammered, with Brazil -- the second worst-hit nation -- crossing 80,000 deaths on Monday.

Two studies offered new hope on Monday of a potential vaccine, however.

Factfile on interferon beta, hailed as a potential breakthrough in the treatment of COVID-19 according to a study published Monday.. By John SAEKI (AFP)

One trial among more than 1,000 adults in Britain found that a vaccine induced "strong antibody and T cell immune responses" against the coronavirus.

An effective vaccine is considered key for a return to normality, particularly for travel and large religious gatherings like the Hajj.

The massive annual Islamic pilgrimage has been dramatically scaled down by Saudi authorities this year to around 1,000 compared with the usual 2.5 million people.

Until a vaccine is developed, many fear they will have to balance the COVID-19 risk with the need to make ends meet.

"We have to learn to live with the virus," said Daniel Bailo, a vendor at a hiking and fishing store in Argentina's capital Buenos Aires.

"If we don't, the economic damage will be worse than the damage caused by the virus."