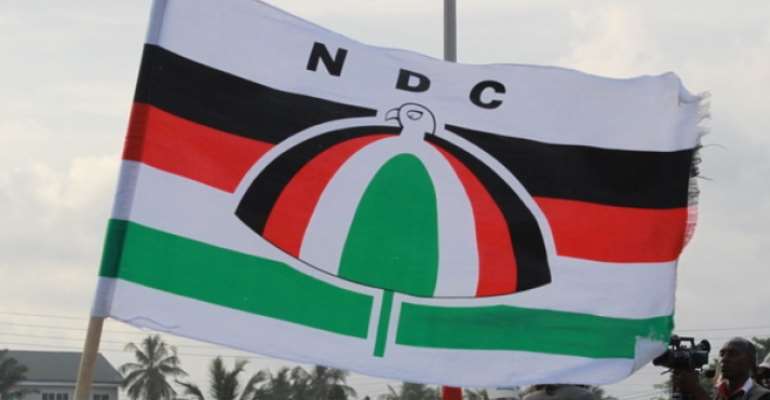 The accusation is coming on the back of a reported attack by armed men on the filling station and Supermarket of the Parliamentary Candidate of the NDC for the Ledzokuku Constituency, Hon Ben Ayiku Narh at Anumantu, Teshie Tsuibleoo.

The incidence occurred on Sunday, July 19, 2020, when a four-member military patrol team from the Teshie Southern Command led by one Captain Dominic N. Nakpaja together with other un-uniformed heavily built men stormed the office of the Parliamentary Candidate which is in the same building of his Supermarket during a meeting with some traditional leaders on the grounds that they have intelligence that the NDC was registering people at night.

Following the siege which led to the locking up of Hon Ben Ayiku Narh as well as the traditional leaders and all those in the office, the NDC has through a press statement stressed that it was all orchestrated by NPP MP Dr. Bernard Oko Boye.

According to the NDC, the incumbent MP has resorted to the foul tactics because he is aware the people of Ledzokuku Constituency are bent on voting him out during the 2020 General Elections.

“We are not unaware of how the NPP has regretted calling for compilation of new register and as a result, have plotted to cash in on the new siege to use State security and it's gangsters disguised as National Security officers to intimidate, harass and frustrate key leaders of our party, and by extension Ghanaians”, a press statement from the NDC has said today.

The main opposition party insists that no amount of machinations will save Ledzokuku Constituency MP from defeat when the country goes to the polls in December.

“Dr. Oko Boye and his NPP have lost it. No amount of schemes will save him. His days as MP for Ledzokuku are numbered and it'll surely end on December 7. He can import the dreaded salafist militant organization, Al-Qaeda, or the jihadist terrorist group, Boko Haram to Ledzokuku, he and his NPP will still suffer excruciating defeat”, the press statement added.

While demanding for the immediate release of Hon. Ben Ayiku Narh and his constituency executives who have been detained by the Police, the NDC says they want to remind H.E Nana Addo that his privileged position as Commander in Chief of the Ghana Armed Forces is not a license for him to transform our revered Armed Forces into NPP Forces.

Read the full press statement from the NDC below:

Good morning ladies and gentlemen of the press, we have once again invited you to our Regional Office this morning, as usual, at a very short notice for a briefing on the reckless use of executive power by the Akufo Addo-led New Patriotic Party government to hound, harass and intimidate political adversaries and innocent Ghanaians in the ongoing voter registration exercise. It is no news that the ongoing registration exercise is tainted with reported cases of violence at registration centres in the region. Shamefully, these acts of violence were and are being engineered by state sponsored brigands of the NPP with the support of some State security officers who have sadly been reduced to internal security of the New Patriotic Party.

Ladies and gentlemen, NDC Parliamentary candidates and executives have, since the start of the registration exercise, reported cases of unwarranted and unprovoked attacks on our agents, and in some cases, on executives themselves, to the Ghana Police Service. Videos and pictures of NPP thugs unleashing vicious attacks on innocent Ghanaians have been submitted to the Police to aid their investigations. In some instances, these NPP thugs, under the guise of National Security Operatives, openly beat people in the presence of State Security officials. In all of these sordid spectacles, no action has been taken by State Security agencies mandated by law to protect innocent citizens on who's sweat and toils they feed.

The latest of such vicious display of State sponsored attack on innocent citizens which has necessitated this press briefing, ladies and gentlemen, was an unwarranted, needless, jejune and superfluous invasion of a supermarket and filing station, Maxxon Supermarket and filing station, owned by our Parliamentary Candidate for Ledzokuku Constituency, Hon Ben Ayiku Narh at Anumantu, Teshie Tsuibleoo on Sunday, July 19, 2020 at about 7:00pm.

For the unnitiated, Maxxon Supermarket and filing Station, like any other filing station, is a public place where people from all walks of life are at liberty to drive or walk in to buy items of their choice. It is however important to point out that, the same building houses the private office of our Candidate and incoming MP for Ledzokuku, Ben Ayiku. Needless to say, it is open secret that strategic political meetings of the PC are held there. It is therefore not out of place to spot known political heads of the NDC there on any day.

Ladies and gentlemen, suffice to state that, at the start of the ongoing registration exercise, our PC and the Constituency Executives agreed to use his office as 'collation centre'. Beginning from June 30 when the exercise begun, all daily printouts, i.e. start of day and end of day, were assembled at his office and the total number of registered voters for each day keyed into a desktop computer at the office. On Sunday, July 19, the PC and Executives had arranged to meet some traditional leaders in his office in the evening. While the meeting was ongoing, our agents came to the office with print outs for day one of the third phase of the ongoing exercise. While at it, a four member military patrol team from the Teshie Southern Command, armed to the teeth, led by one Captain Dominic N. Nakpaja together with other un-uniformed heavily built men stormed the office.

Captain Nakpaja and his men, together with the un-uniformed men, which were later indentified as members of NPP's criminal group, Invincible Forces, unintelligently claimed they had picked intelligence that the NDC had set up a registration centre at the PC's office and was registering people at night. The officers, together with the NPP hoodlums, obviously acting on the instructions of the failed MP for Ledzokuku, Dr Bernard Oko Boye, locked up our PC, traditional leaders and all those in the office and held them incommunicado. For a moment, the place was turned into a scene akin to invasion by armed robbers. The officers said they had instruction from the dreadful but unknown inaudible 'orders from above' to search the office and seize the supposed registration machines. The PC and his team, rebuffed the allegation and pointed to a desktop computer that the Party's IT officer was using to collate the registered voters for the day. Bent on carrying out the orders, the officers and their criminal gangs counterparts from the NPP insisted on searching the office and seizing the desktop computer. This was fiercely resisted as the officers and NPP hoodlums could not produce any search warrant. Funny enough, the military men and their gang invaded the office ostensibly to arrest NDC registering voters at night without the knowledge of the Kpeshie divisional command. It will also interest you to know that at the time the illegal invaders came, and as we speak, the EC has not complained or reported that any of it's BVR kits is missing.

The illegal invaders nonetheless attempted to use force to seize the computer but the good people of Teshie, incensed my the failed leadership of Oko Boye and the Akufo Addo government, massed up in their numbers and resisted them. It took reinforcement from the Teshie Southern Command to disperse the crowd amidst gunshots. They however succeeded in confiscating the desktop computer and EC's print outs from the various registration centres for the first day of the third phase. The Constituency Chairman and Organizer and some others followed it up to the Accra Central Police station where Captain Nakpaja claimed to have lodged official complaint. Upon arrival at the Station, the police CID in charge said he had been instructed by the powers that be to detain the Constituency Chairman and Organizer for reasons or crime we are yet to be told. It should be on record that the illegal invaders of our PC's office did not see any of the 8000 BVR kits deployed by EC for this exercise, save a desktop computer and daily printouts. We are at lost how a once credible institution like the Ghana Armed Forces made up of men and women with unmatched intelligence, will invade private office of a private citizen at night and claim that a desktop computer is being used to register potential voters. It is also on record that no EC official was seen or arrested at the private office of our PC. If the officers made any such arrest, we challenge them to make their details known to the EC for them to be punished. Questions however still remain unanswered as to who was doing the Registration, which machines were being used for that purpose and onto which system was the supposed night Registration feeding on or into?

Ladies and gentlemen, we are not unaware of how the NPP has regretted calling for compilation of new register and as a result, have plotted to cash in on the new siege to use State security and it's gangsters disguised as National Security officers to intimidate, harass and frustrate key leaders of our party, and by extension Ghanaians.

The NPP, particularly Dr Oko Boye is called upon to note that, the people of Ledzokuku are already aware of the truth in all issues leading to this senseless invasion of Maxxon supermarket and filing station. The daily impressive turnouts at the registration centres, which has sent Oko Boye quivering, is indicative of the fact that the people of Ledzokuku have a collective agenda to convert the 'new register' into new President and new MP on December 7.

Dr. Oko Boye and his NPP have lost it. No amount of schemes will save him. His days as MP for Ledzokuku are numbered and it'll surely end on December 7. He can import the dreaded salafist militant organization, Al-Qaeda, or the jihadist terrorist group, Boko Haram to Ledzokuku, he and his NPP will still suffer excruciating defeat. We salute the good people of Teshie for manningng up and resisting the tyrannical tendencies of Oko Boye and Akufo Addo. The display of the people's power is a foretaste of how they have ready themselves to once again give Ledzokuku it's befitting leadership on December 7.

To President Akufo Addo, we want to remind him that his privileged position as Commander in Chief of the Ghana Armed Forces is not a license for him to transform our revered Armed Forces into NPP Forces. While we condemn these unwarranted and senseless harassments in the strongest of voice and energy, we call on the Chief of Defence Staff, Lt General Obed Boamah Akwa to guard against the enviable reputation of the Ghana Armed Forces. Recent happenings, particularly in the ongoing registration exercise is blemishing the respect that the military commands in this country. Our fear is that if these things continue, the citizens may be forced to use unauthorized means to defend and protect themselves. The military should be the last agency to bow to NPP's pressure and desperation to explore crude tactics to hang onto power.

We demand that our Constituency Chairman, Organizer and any other person being detained in respect of these false and unintelligent allegation be released immediately. We do not expect anybody to ask us what we will do when they are not released. Whoever wants to know what we will do in the unlikely event they are not released should ready him or herself to witness what will happen thereof.