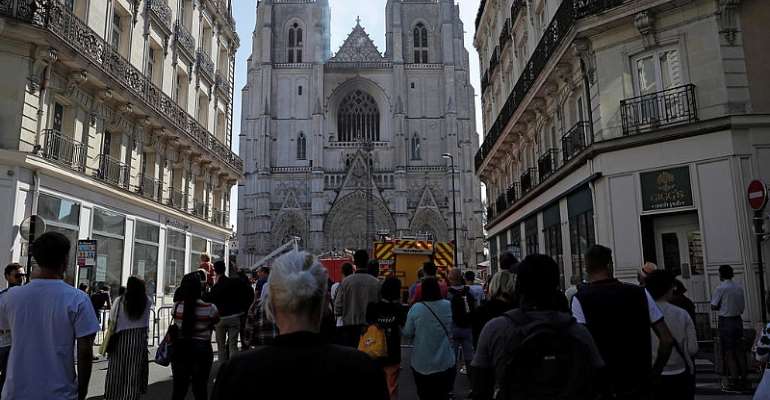 French prosecutors investigating a fire that damaged the Gothic cathedral in the western city of Nantes have cleared a volunteer of suspicion, leaving many questions about the incident unanswered. Government officials promised Monday to ensure the cathedral would be restored.

Police cleared the volunteer, a 39-year-old Rwandan refugee, of all suspicion on Sunday and released him after questioning him on "procedural grounds".

The man had been in custody since Saturday afternoon as part of an arson investigation into the fire that apparently broke out at three parts of the Saint Peter and Saint Paul Cathedral in Nantes, in western France, in the early hours of the morning.

Police said they wanted to “clarify elements of the schedule” of the volunteer, who was responsible for closing the cathedral on Friday and was the last known person on site before the fire.

Nantes prosecutor Pierre Sennes said the man had been held as part of “normal procedure” and later confirmed he had been released “without charge”.

The man's lawyer, Quentin Chabert, said earlier Sunday there was “nothing that directly links my client to the fire”.

Cathedral rector Hubert Champenois said the man was a Rwandan asylum-seeker who volunteered as an alter server and that he had known him for four or five years.

“I trust him like I trust all the helpers,” Champenois said.

Many questions over cause of fire

With the volunteer freed from custody, many questions remain about what caused the fire that destroyed the cathedral's 400-year-old grand organ, stained-glass windows and a painting.

Police are treating the fire as intentional but have not ruled out accidental cause.

So far investigators have found no signs of a break-in and it is not clear how or when a suspect may have entered the cathedral.

Forensic teams were on-site Monday but so far investigators say they have found no flammable material and are unable to explain why three separate fires appear to have been ignited at separate ends of the building.

Cathedral staff have not ruled out an accidental fire.

“The electric system was dilapidated in many places,” a clerk, Jean-Charles Nowak, told BFM television.

“The electric panel was refurbished recently, but it's an old building with cables all over the place, some in out of the way places. It's possible there was a short circuit.”

Fire officials said the organ was completely destroyed and its platform unstable, but that the fire was not as severe as the one that destroyed the spire and parts of the roof the Notre-Dame Cathedral in Paris in April 2019.

The French government said it was prepared to finance repair work on the 15th-century structure in Nantes.

“The state will take responsibility for the restoration of the Nantes cathedral,” said Bruno Le Maire, Minister of Economy and Finance, on BFM television.

“The state, which owns the cathedral, will take responsibility for its restoration work,” Le Maire tweeted with a link to the interview.

“I lived in Nantes for six months and had the opportunity to listen to this organ, a 17th century monument. It's very sad.”

The fire was initially reported at 7:45 on Saturday morning. Firefighters extinguished the blaze in about two hours.