My Take On The Ogwanfunu-Jane Ticket 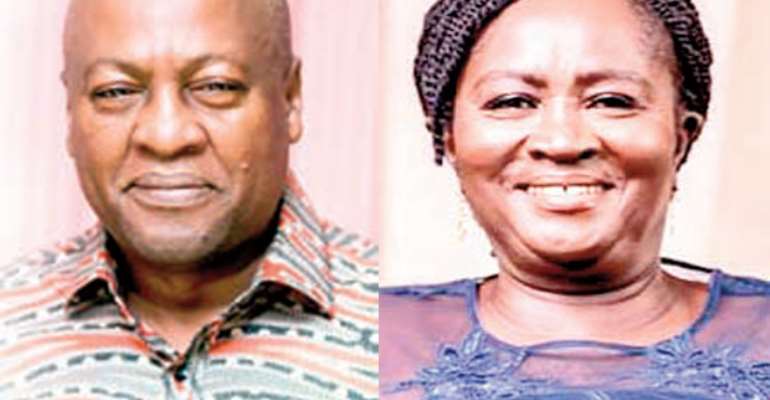 Today’s piece was inspired by the numerous requests by ardent readers of this column seeking to hear my take on the choice of Prof. Naana Jane Opoku-Agyeman as the running mate of Candidate Ogwanfunu. I was thus compelled to suspend the 'dziwo fie asem' policy, which had necessitated my silence on the matter. Indeed, I never knew my opinion mattered so much to my readers.

This piece is targeted at those with open minds, and not party fanatics. This is because trying to convince party fanatics is like killing a mosquito on your cheeks. You might kill it or not, but you will end up slapping yourself for sure.

Was I surprised at the choice of the academic as running mate of President Ogwanfunu? Yes, I was. I was of the belief that choosing someone with a background in economics would have been a better choice. But I think she was his safest and best choice considering the options available to him.

With the exception of Dr. Kwesi Botchway, all the other contenders had baggage, which are still fresh in many minds. Some are currently in court struggling to untangle themselves from the legal web, while others are on the verge of being dragged to court to answer for alleged malfeasance in the oil sector during President Ogwanfunu’s reign. Can you imagine choosing a running mate only for him to spend more time in court than on the campaign trail? If I were in President Ogwanfunu’s shoes, I would do same.

The argument being espoused today about the choice of Prof. Opoku-Agyeman brings a sense of déjà vu. We heard similar stories when the late Amissah-Arthur was appointed the vice-president and running mate of the same man. They rubbished Dr. Bawumia’s former deputy governorship role at the Central Bank and said the real governor and economic guru had arrived. But when the real economic debate started, we all saw how Mr. Deputy Governor taught Mr. Governor useful economic lessons. And that marked the beginning of the end for Mr. Governor.

I recall Mr. Governor not being able to answer questions from Mr. Deputy Governor, claiming he had been advised by family and friends not to engage in that kind of discourse. He eventually tried answering some of the questions, which sounded like voodoo economics to even lay persons like my grandmother. In the end, the ticket performed abysmally.

Today, it is a debate between a PhD (Doctor of Philosophy) holder and a professor. Indeed, it is only ignorance that will make one compare the two. There is no qualification higher than a Doctor of Philosophy (PhD). 'PhD' is a terminal degree whereas 'Professor' is a rank related to university teaching. How then can someone who has worked in industry most of his working life ever get a 'professorial' title when such titles are reserved for only those in academia?

Well, whether professor or not, we’ve had the opportunity to see Prof. Opoku-Agyeman’s work at the Education Ministry and I can bet my last Ghana cedi that a first degree holder could have done better. I cannot remember seeing any significant change at the ministry during her reign as minister.

Yes, no scandal was recorded under her watch so her integrity can be said to be intact. But trust me when I tell you that no trainee nurse or trainee teacher will believe her or her party’s promise to maintain the trainee allowance after their ‘yen tie obiaa’ stance when they were in power.

In any case, who will rate a running mate higher than the main candidate? A corrupt and incompetent candidate will forever be perceived in that light no matter the choice of running mate. It is in that light I conjecture that this too will be a losing ticket.

As I write, Interpol has issued an arrest warrant against Samuel Mahama, President Ogwanfunu’s brother. Is there still any doubt about the identity of Government Official 1 in the Airbus bribery scandal? Surely, the chickens are gradually coming home to roost.

Abusuapanin, one person whose opinion I will like to hear on this matter is Allotey Jacobs, aka 'The Educated Fisherman'. I’m yet to hear him speak but I’m pretty sure he is not enthused about the professor’s nomination as running mate because we all know he expected someone who could match Dr. Bawumia boot for boot.

Many Zu-za folks will not admit it publicly; but they do concede privately that Dr. Bawumia is a very formidable opponent. The man who has changed Zongo politics from rice and sugar distribution to offering scholarships to Zongo youth to pursue medical studies abroad is indeed not an opponent to toy with. The man who has helped to resuscitate the dying economy Zu-za left behind, and went ahead to digitize it, is definitely a very formidable force to reckon with.

With such high performance as vice-president, coupled with his unblemished integrity when it comes to corruption, I cannot help but wonder how the lady professor could be more attractive than 'The Walewale Adam Smith' in the December 2020 polls. But only time, they say, can tell the future; so let’s wait for it!

A Distressful Experience with the Covid-19 Management/Contai...
19 minutes ago