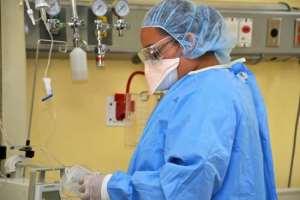 Why is Covid-19 killing Minority doctors abroad where they are better equipped than in Africa? Yet more African health workers are ready to jump into airplanes arranged by the same unsrewpolous Agents that sold naive youths to Arab countries as body parts, prostitutes, slaves and househelps. If these youths are greedy half illiterates, what do you call our trained doctors?

Let us face it, many of us are looking for greener pastures because capital expenditure that could have created a livable environment at home are used for personal emoluments of our political leaders. Their salaries are so high in Nigeria, no politicians even in the United States, the richest country comes close.

Therefore, all the professionals and other workers think they are poorly paid since they shop in the same market as their politicians. Moreover, these politicians shop abroad with laundered money. They and their children relish the display of conspicuous spending everywhere including social media in disguise for how God has blessed them for working hard!. As a result, many Youths jump at the lure of promised opportunity to work in Britain and the United States in order to earn what they could not at home.

Even if we give a copy of Treasury keys politicians have to those bent on leaving for overseas, it will not stop them. We will only encourage them to launder as much money as they possibly can. If they had the brain to improve their own environment, they would not be running abroad using any and every opportunity they get. It has more to do with ready-made convenience than building their country up: Surulere v. Olorunsogo.

Instead, come out clean that a country like Kenya or Nigeria does not have the income of the United States to support such outlandish salaries. Kenya cut salaries after an outcry. But Nigeria politicians could not let the outrageous salaries go. So they started borrowing outside to pay unsustainable emoluments. They are ready to sell the country to foreigners while they and their children relocate to foreign countries. It does not matter how they get there.

We should not be surprised that African Youths argue ignorantly to justify jumping into the desert, sea, planes and ships without visas at the risk of their lives. It is even sadder that some of those that are exposed to adversities and suffering abroad send pictures and videos home lying about how lucky and great they are. Pointing out realities to them is pointless when they see Sakawa boys like Hushppupi, Invictus Obi, Nana Wan or Criss Waddle.

Angola and Nigeria kleptomaniacs made more money from oil that hardly benefits their masses. Some of the Youths have given up while others resign to crime and corruption as the way out of poverty. They are only waiting for their own turns to loot. No allocation of money from anywhere for any project or to any destination is safe. There are too many waiting to strike first and embezzle. If they cannot get one chance, they are bailing out of Africa no matter what they do outside. The problem is many jump from fry pan to fire.

However, how do we explain the same risk or anger from the children of politicians and their cronies that are still plugging African countries, looting and laundering money out. Their children cry louder after African resources have been wasted to train them in the best professions and schools all over the world. The irony of blaming the poverty in the land being created by their parents is staggering. If their parents had used the same resources to improve infrastructure, there would be less youths risking their lives to venture out.

One of the best answers given by a South African nurse for traveling out claimed she made enough money to send to her parents, send her brothers and sisters to medical and nursing schools back home. In order words, by venturing out, she was able to triple what she could for her family than staying home.

Indeed, we can say the same about missionaries, explorers, and foreign Investors making killer profits in Africa than anywhere else. They make enough money for their services in Africa to retire early in luxury in Europe and America. Even a mercenary in Africa takes certain risks to make much more fighting in Africa than a subsistence living at home with all the freedom taunted.

While Africans go abroad to make enough money to live from one paycheck to another like most of their hosts, Europeans, Asians, and Americans come to Africa for fortune to live in luxury they never imagined in their countries. The difference between cheap and inflated salaries for labor.

However, if coronavirus is hitting Britain's minority doctors harder and dying more, you are useless to yourself, your families, and your Countries. Twenty- seven out of the 29 doctors who have died of COVID-19 in the UK were ethnic minorities, most born overseas according to the British Medical Association. www.washingtonpost.com May 20, 2020. It is mere hypocrisy that the "grim toll has confounded health experts, alarmed minority physicians, and startled a nation that relies on immigrants to swell the ranks of its public health-care system".

It sounds like those health experts in the United States trying to explain why blacks that makeup only 13% of their population, die at a higher rate or more of them in correctional institutions than whites. They blame underlying pre-existing medical conditions. The same endemic risks these new African immigrants are going to face.

If you are looking for international fame that will translate to wealth, discover or produce something at home that can compete with international products and name your price. No matter how much you wish to be like them, copy them or bleach your brain white, you can never be them, the real thing is your unique self.

These young professionals that are fleeing African countries always complain that their laboratories at home are not well equipped for them to make 21st-century discoveries in Arts and Sciences. The fallacy of that narrow excuse is that African countries have the biggest laboratory in the world - Bush. The same Bush and jungle that foreigners come and discover pharmaceutical products that turn them into multi-billion companies and billionaires. Our youths are too busy cramming for foreign examinations instead of searching for discoveries at home.