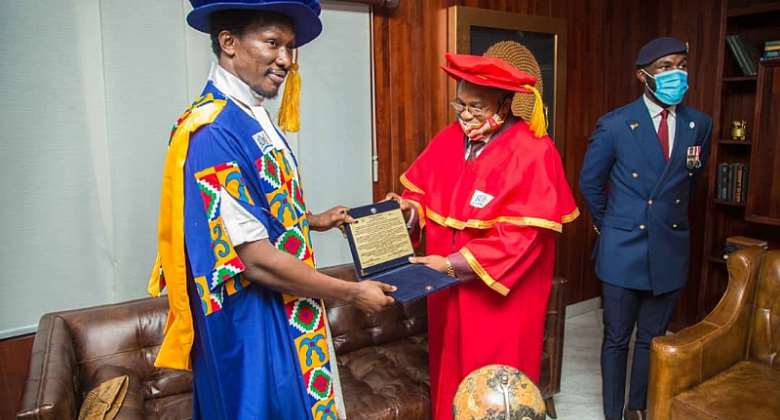 In recognition of his outstanding achievements as a young entrepreneur and a business magnate with an impeccable interest in human development and philanthropy, through his Freedom Movement, Freedom Jacob Caeser, also known as Nana Kwame Bediako, has grabbed two awards.

This was given to him by the Rectitude International Mission in collaboration with the World Diplomatic Federation and the Pan African Heroes Foundation with two prestigious honors, namely the ‘STAR OF AFRICA HONORS’ and the ‘STAR GENERAL HONORS’ at a short ceremony in Accra.

These are all in line with the prominence of his successive achievements, cadence, and care for the countless needy people in society.

The President of the Freedom Movement, Freedom Jacob Caeser, is a true pan-Africanist, who inspires a great future in the youth through adding value to the communities, countries, and Africa at large through conscious efforts to undo poverty through wealth creation.

In his acceptance speech, the PRINCE OF AFRICA affectionately called, dedicated the awards to the young and upcoming entrepreneurs to have hope to conquer and change the African narrative.

"Africa! You are my hope and Africans, you are my strength; for so many decades we couldn't acknowledge and appreciate our own; hence we have lost our root, our people, and our history. The men of Africa today have decided not to only point their fingers but to truly acknowledge their people, to spiritual ordained their people for the work that we do is not because we want to claim anything back from our people, is because we want to put back what has been taken away from us. How do we add to our people, societies, communities, nations, and the continent? Freedom Jacob Caesar I stand for this.

...Therefore I'm dedicating this to the youth of today, the young people of Africa that you can do much more than what I have already started. I just want to be that example for you to know that it's time we stand up for ourselves", he said.

He further added that all African governments should brace the odds the coronavirus pandemic presents and build a stronger and sustainable future for the youth to succeed.

The Communications Strategist & International Partnerships Commissioner of the Rectitude International Mission, (RIM), Isaac Rockson, on his part, highlighted the importance of the awards as a way of recognizing Africans who are contributing excellently to the development of African societies.

Mr. Rockson pointed out that, it's about time we (Africans) promoted and also projected our own to the global world.

He admonished the media to speak well about the few Africans who are trying to change the narrative of Africa.

Citing the opportunity, Mr. Issac Rockson said, "I will also use this platform to speak with the politicians that we also have to protect the very few that we have in our country so that this country will be solid and grow".