I Stand With Mubarak Bala: What About You? 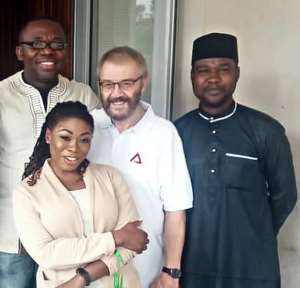 There are times in life when we cannot afford to be neutral or to stand aloof. There are times when it is not golden to be silent. There are moments in history when we must take sides. There are issues in life that demand that we take a stand, a categorical stand against oppression, injustice, and tyranny. That time is now. That moment is here. And that issue is the arrest and persecution of Mubarak Bala. Bala's case has exposed the pretensions, hypocrisy, and inequities in the Nigerian police and justice system. It has demonstrated that in Nigeria, especially in northern Nigeria Islam trumps human and constitutional rights.

Mr. Bala, president of the Humanist Association of Nigeria, was arrested on April 28 2020 in Kaduna. The police later transferred him to Kano where some Islamists petitioned that he made Facebook posts that insulted the prophet of Islam. Bala is not a Muslim. When he came out as an ex Muslim in 2014, the family consigned him to a mental hospital.

Now as required by law, the police supposed to charge or release Bala within 48 hours but they did not. And they have not. Instead, they have held him incommunicado. It took several weeks for the police in Kano to admit that Bala was in their custody. Petitions were sent to the Force Headquarters in Abuja to have his case transferred to a neutral ground but the requests were ignored.

It took weeks to discover that the police in Kano had approached a magistrate court with charges that included a cybercrime offense that a magistrate court has no jurisdiction to hear. Meanwhile, the police have yet to formally arraign Mubarak Bala or grant him access to a lawyer. Almost three months after his arrest!

Meanwhile, the police continue to give the impression that they are processing Bala’s case following the law. They are not. Access to legal representation is a constitutional right. And it took weeks for the court to order that the police grant Mubarak access to a lawyer. It took a couple of weeks to get the court order signed and delivered to the Commissioner of Police in Kano. Now nobody knows how long it would take the police to obey the court order. That is if they would obey.

The police are orchestrating this travesty of justice to appease the Islamic establishment in Kano. Some are saying that this legal charade would continue until the Islamists who brought the petition are satisfied that Mubarak Bala has adequately been punished.

But the case of Mubarak has reached a stage where every Nigerian must speak out and take a stand, no matter the ethnic, religious, or irreligious background. At this point, it does not matter if one is from northern or southern Nigeria. It does not count if one is Nigerian or not, African or non-African. Bala’s case is a clear illustration of Islam-motivated contempt for humanity and justice masquerading as police/court processes. Look you need not be an atheist or a humanist to see through this jihadist scheme.

I am an atheist but I have campaigned against accusations of blasphemy against Muslims. I have stood against blasphemy allegations against Christians. I have condemned the persecution and oppression of religious/non-religious minorities including Muslims. The saying: “I may not agree with what you say but I will defend to the death your right to say it” should apply to the case of Mubarak Bala.

I am not a Muslim and do not believe in Allah or Muhammad as a messenger, great or small. But I will defend to the death the rights of Muslims to declare and practice their faith even in situations and circumstances where such a declaration could be adjudged blasphemous.

You need not agree with the Facebook comments that Bala allegedly made before demanding that the police in Kano end the ongoing legal charade. You need not be a humanist to urge the Islamic establishment that has taken Bala hostage –while using the police as a front- to release Mubarak. You do not need to be a human rights activist to demand an end to the violation of Bala’s human and constitutional rights.

So, are you one of those who are angry over the acts of injustice being meted out to Bala since his arrest? Are you among those disturbed by the pervasive Islamic tyranny in Kano? Are you worried about the bloodletting, persecution, and oppression of religious minorities in the region? Any you - a Muslim or a Christian, a Nigerian or non-Nigerian- concerned over the fate of Mubarak Bala and the persecution of atheists and islamic dissenters in the region?

I stand with Mubarak Bala. What about you?

The author has 326 publications published on Modern Ghana.

President Akufo-Addo’s sterling leadership saved us from COV...
6 hours ago