LETTER TO MARTIN AMIDU: John Mahama this, airbus this, Interpol that, after all, we all drink from lethe 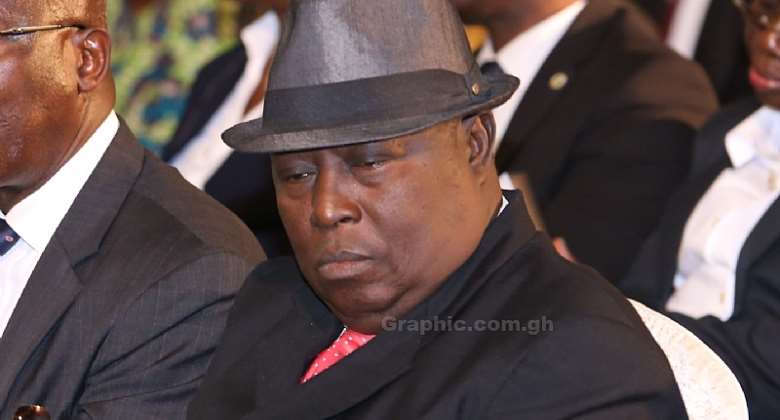 I greet you in the name of the ancient of days! I am glad to let you know that I love your name; Martin Alamisi Burnes Kaiser Amidu including the fascinating sobriquet; citizen vigilante! May you live long for your unflinching patriotism, and for preserving the national treasury for the posterity. Oh, truly your conduct is very impressive only if not reaction formation [In psychology; the process of expressing repressed feeling at the conscious level in opposite form] since you were sacked by Mills-Mahama led National Democratic Congress [NDC] government! Nonetheless, I regret to inform you that I do not admire your title; the special prosecutor. I am scared by the name because it sounds like you have been appointed to prosecute special people in Ghana! “The Ghana Police CID on Thursday confirmed that the Special Prosecutor put in a request for a red notice on Adam Mahama and three others in relation to the Airbus scandal” (Source: MYJOYONLINE.COM, Friday, July 17, 2020). After all, don't we all drink from lethe?

In famous Greek mythology, Lethe is presumed to be a river in Hades [the land of the dead and the gods who rule the land] that inflicted forgetfulness among mortals who drink from its waters. Is it not commonplace that forgetfulness stills dissension? Without remembrance, souls who drink from lethe remain without replenishment, incapable of assimilating their experience of the present with their sense of self and place in the world. It was against such oblivion that emanated the probability of truth. Truth referencing aletheia [somewhat unconcealment that involves the process of pushing back the borders of forgetfulness]. Given that reconciliation demonstrates both ethical and political aspiration not only for an order but for a sense of being –together in the world, then a society divided by the past wrong must seize the chance of truth.

Dear citizen vigilante par excellence, the truth is that in October 2019, Ghanaians were saddled with the attempt by some citizens to collect electricity bills from them as seed money to purchase their property in the name of power distribution services [PDS]. How about investigating this calculated attempt to defraud Ghanaians? Perhaps you drunk from lethe, so, the retribution of forgetfulness has inflicted you! Amidu, or you are waiting for the president to direct you like the AIRBUS scandal? I am just curious to know why the PDS scandal that occurred in October 2019 nothing is done about it yet the embryonic Airbus scandal that broke out in 2020 is being investigated now!

Aha! Lest I forget my venerable friend of no mean repute. Your request stated that Adam Mahama was born in Tamale in the northern region of Ghana but President John Mahama guaranteed his Ghanaian passports. How is this possible because someone born in Tamale, by Ghanaian parent is a Ghanaian? Maybe, he only had the birth certificate but not Ghana card or Ghana passport so Mahama vouched for him? Huh! Citizenship is an intricate process established by law and it is pathetic for a citizen to vouch for fellow citizen's right to a nationality.

For example, regardless of nationality, any individual in Ghana born before independence in 1957 is a Ghanaian. Some people can become Ghanaians via naturalization. President Akufo-Addo recently swore in some naturalized African Americans in Ghana. Apart from citizenship by Ghanaian parents, adoption, and marriage are among other means of becoming a Ghanaian. So how can a poor Papa Akote who is farming at Sefwi Bodi with his wife Maame Atwee selling “kako” and their son Kofi Adi, operating Abobo Yaa determine whether Mossi Yatenga inhabitant in their village had undergone the aforementioned processes to vouch for his/her citizenship? Anywho, so who is vouching for the high school students on campus that electoral commission (EC) officials are busily registering?

Reflecting on issues that bother on slavery, American abolitionist, Harriet Beecher Stowe authored a controversial book entitled Uncle Tom's Cabin in 1852. Like Menelik II of Ethiopia stated, I have no intention to be an indifferent spectator. I think reflecting on the current legal inconsistencies in Ghana by adapting and authoring Uncle Willie's or Uncle Amidu’s Cabin is not a far cry from poetic justice?

Dear venerable Amidu, erstwhile United States Supreme Court Judge, Oliver Wendell Holmes, Jr argued that “If there is any principle of the Constitution that more imperatively calls for attachment than any other it is the principle of free thought, not free thought for those who agree with us but freedom for the thought that we hate.” What is the principle of free thought here to Ghanaian public office holders? In your hand, my fellow countrymen, and not in mine, is the momentous issue of selective justice. Ghanaians will not assail you. You can have no bias judgment in court without being yourselves a dishonest person [Adaptation from Abraham Lincoln]. Amidu, the name of the game is self-disclosure. Sir John of blessed memory did a fantastic self-disclosure. He reportedly said when president Akufo-Addo offered him the position of Ghana Port and Harbor Authority CEO, he politely and hilariously rejected because he [Sir John ] was afraid of sea and that his Onoo forest environment suits forest commission CEO! If Ghana Education Service[GES] recruits and sends an individual to Krobo Girls High School as a biology tutor; there is nothing wrong for the teacher to whisper and self-disclose to GES authorities that "young girls are his weakness so he should be sent to a boys school." If Akufo-Addo nominates you for the supreme court, an honest judge must self-disclose: "Mr. President, thanks for the confidence reposed in me, but my strong attachment to your party will not make me a neutral judge? Dear Amidu, you could have humbly rejected your current position on the grounds that you have so much hate for John Mahama and the current crop of NDC people, and that this will compromise your neutrality.

Lets us heal Ghana and make it a better place for and for me through honest self-disclosure. I am not saying that do not probe into airbus scandal my venerable uncle! Nevertheless, the thoroughgoing inconsistence interpretation of the constitution risk posing danger for Ghana! Dear venerable Amidu, I know you are good writer; I am just reminding you that your eponymous character as anti-corruption crusader risk sinking into oblivion if you become selective. Do not response to this goodwill advice with a gratuitous screed!

Crowd jeers, boos Akufo-Addo on stage; chants 'away!' amidst...
10 minutes ago