Make no mistake, Jane Nana Opoku-Agyemang is a courageous Fante! 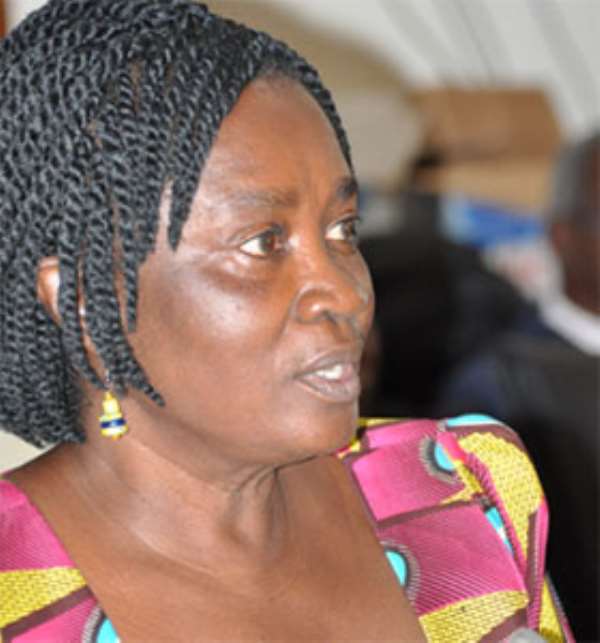 Some reflective observers thus predicted that flagbearer Mahama will most likely select an Akan indigene.

Many observers were wondering whether the NDC’s 2020 presidential running mate was going to be another true native of Fante.

As it was predicted by observers, the NDC’s 2020 flagbearer, John Dramani Mahama has duly selected another true indigene of Fante, Jane Nana Opoku-Agyemang as his running mate for 2020 general elections.

I would, therefore, like to congratulate Jane Nana Opoku-Agyemang and quickly add that she is a courageous Fante.

Apparently, Jane Nana Opoku-Agyemang is the fourth Fante to become the NDC’s presidential running mate. She follows the late Arkaah, the late Mills and the late Amissah-Arthur.

The three gentlemen were all from the Central Region of Ghana and became vice presidents under the tickets of the NDC.

Regrettably, however, they lost their lives in bizarre circumstances at the prime of their political careers.

Unfortunately, Vice President Arkaah was the first to depart from life in 2001 following a catalogue of regrettable incidents.

It was reported in 1995 that a brawl broke out at a Cabinet meeting when President Jerry Rawlings uncharacteristically beat up Vice President Arkaah out of the room, according to an official government statement at the time (See: President beats Vice; ghanaweb.com, 31/12/1995).

The story is told, albeit disturbingly, that Vice-President Nkensen Arkaah, who chaired all Cabinet meetings, was presiding over the session on Thursday, 28 Dec. 1995 when President Flt. Lt. Jerry John Rawlings challenged him over derogatory statements the Vice is alleged to have made at his party congress the previous week.

It is, however, alleged that President Rawlings challenged Mr Arkaah to go out and prove to the world the questionable or so-called corrupt things which take place during meetings of the cabinet.

"Until then", the president insisted, "Mr Arkaah had no moral right to continue to participate in the deliberations of a cabinet for which he had no respect."

Sources however disclosed that a few minutes later, President Rawlings took Arkaah's arm, insisting that he should leave. Arkaah was reported to have reacted by attempting to shrug off the hand holding him.

Arkaah was quoted to have said: "He gave me a terrible blow on the shoulder which sent me falling to the floor. He attempted to pull me up by the shoulder in order to hit me further. He tore the shoulder of the jacket in the process. In his frustration, he kicked me a couple of times in the groin before members present were able to restrain him."

When Vice President Arkaah completed his term in office, another true son of Central Region, Professor Atta Mills, was selected by President Rawlings to take up the mantle. The late Mills was vice president from 7th January 1997 to 7th January 2001.

President Mills progressed to the presidency on 7th January 2009 after two unsuccessful attempts in 2000 and 2004.

In spite of the fierce resistance from the hierarchy of the NDC, the indefatigable President Mills stood his ground and selected John Dramani Mahama as his running mate for 2008 election.

The late President Mills did his utmost best until his sudden and inexplicable death on 24th July 2012.

Of course, as a descendant of Biblical Adam, the late Mills was not without infelicities. He had excellences and imperfections. Nonetheless his light shone among the voracious NDC apparatchiks.

Verily, the late Mills was not on the side of corruption. And as a result, he earned himself more enemies than friends in the NDC.

Take, for instance, it is on record that prior to the dubious Wayome’s judgement debt payment of GH51.2 million, the late Mills warned the ‘create, loot and share’ cabals not to effect payment, yet the conspiratorial plotters defied the good old Mills orders and doled out the staggering amount to Wayome, who had no contract with the government of Ghana.

It would, therefore, appear that there was a bad blood between the late Mills and some of the NDC officials.

The alleged enmity between the late Mills and the echelon of the party may explain why they have obtrusively failed to recognise his achievements in their much publicised green book.

Although it seems dreary and unfortunate to keep visiting the sudden and bizarre death of former President Mills, it benefits no one, when we all keep quiet.

Indeed, the late Mills family don’t have to endure all the political inebriations and insobrieties over their departed loved one. Nevertheless, it would be a worthwhile if the good people of Ghana knew what actually happened to former President Mills on that fateful day.

And, much as our beloved president’s demise was so bizarre and painful, discerning Ghanaians can only invoke their instinct for tact and diplomacy and keep empathising with the late Mills family for their never ending pain over the unfortunate death, while we venture endlessly to pin together the apparent straddled jigsaw.

It would be recalled that somewhere in 2016, Papa Kwesi Nduom revealed that some of the NDC people themselves thanked God that Mills died. He posed: “is that not strange?”

It would, however, appear that the 2016 PPP flagbearer had a valid reason to blame the NDC apparatchiks for the late Mills untimely demise.

Take, for example, speaking to GHONE’s Nana Aba Anamoah in an exclusive interview a few years ago, the founder of NDC, J. J. Rawlings said the NDC was in a terrible state under the late Mills.

Rawlings lamented: “If God hadn’t invited him, and I am saying it again; NDC would have been in opposition in 2012”.

“It was terrible, the climate was really bad for us; we all knew about it, we were just keeping quiet”. “It was his departure that gave NDC a saving grace,” he stated.

Let us be honest, any reflective thinker like Papa Kwesi Nduom would no doubt draw an adverse inference from the NDC founder’s claims that the NDC faithful were happy to see the late Mills go.

More so if we engage in deductive reasoning on former President Rawlings’s apparent chilling revelations, the inference we could draw is that the NDC apparatchiks were happy over the late mills death.

For if nothing at all, former President Rawlings audaciously disclosed that all the NDC apparatchiks were extremely worried over the late Mills fitness and did not have any hope whatsoever on his chances of securing a second term in office.

“In the view of former President John Rawlings, the NDC would have been languishing in opposition if the professor had not died”.

The baton then fell on another great son of Central Region, Paa Kwesi Amissah-Arthur. He became the vice president from July 2012 to 7th January 2017.

I must, however, admit that the untimely passing of Vice President Paa Kwesi Amissah-Arthur came as a personal blow to me.

I must confess, as a self-styled anti-corruption crusader, I found out that the late Amissah-Arthur was incorruptible, despite the much touted sleazes and corruption in the NDC.

So, I was not the least surprised when after his sudden demise, the unwearied Honourable Kennedy Agyapong disclosed, albeit unconventionally, that the Late Amissah-Arthur confided in him that some NDC members were grabbing money here and there as if there was no tomorrow.

Well, the General Secretary of NPP, John Boadu, could not have said it any better when he asserted some time ago that the late Paa Kwesi Bekoe Amissah-Arthur unfortunately joined the wrong political party (NDC).

Like the late President Mills, the late Amissah-Arthur had unbelievable morals.

He only entered into politics with the sole aim of impacting the lives of the poor and disadvantaged Ghanaians. What a loss?

In fact, upon realising his moral uprightness, I took up a conscious decision and wrote a series of articles in support of his political fortunes. Unfortunately, however, the one and only person with high integrity within the Umbrella fraternity in my humble opinion, is gone forever.

All of a sudden, my dream of volunteering for the forward-thinking vice president ended. It was with deep regret that my sustained campaign to have him as the future NDC flagbearer came to an end abruptly. How unfortunate?

Like his predecessors and tribesmen (the late Vice President Arkaah and the late President Mills), it is with a heavy heart to state that the late Amissah-Arthur, unfortunately, perished at the height of his political career. How sad!

Back then, some of us ruminated solemnly over Prophet Owusu Bempah’s prophecy that some elements within the NDC had something to do with the late Amissah-Arthur’s untimely demise. What sort of sacrifice, I ask?

May the Almighty God protect and guide Jane Nana Opoku-Agyemang from the wicked plot of the Lucifer in the flesh within. Amen!