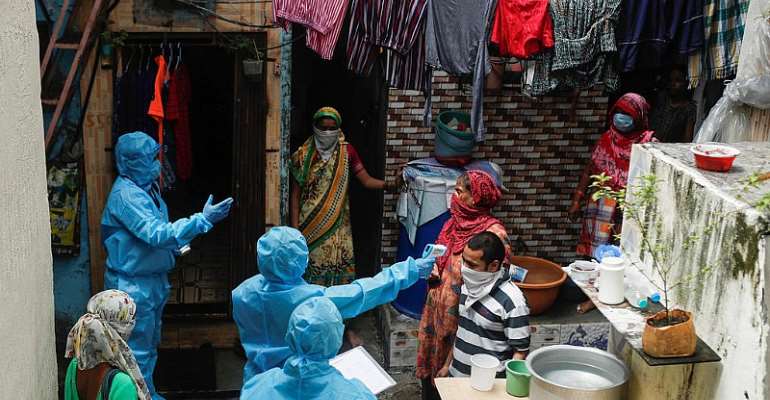 India has reported a fresh surge of 34,956 new Covid-19 infections in the past 24 hours, taking it past one million cases nationwide. It becomes the third country after the United State and Brazil to surpass the stark landmark.

The national Covid tally stood at 1,003,832 with a total of 25,602 coronavirus-related deaths, India's federal health ministry said on Friday.

The health ministry said a total of 635,756 people had also recovered.

“The current caseload remains manageable because of proactive measures of containment including house-to-house surveys...contact tracing, aggressive testing and timely diagnosis of cases,” it said.

Health experts and virologists such as Shahid Jameel said they believed “herd immunity” was a likely reason for the exceptionally good recovery rate.

“Even in the high numbers there may be a silver lining that if more and more have been infected and they are not showing up in hospitals then maybe we are slowly moving towards herd immunity,” Jameel told media.

But several states and larger cities seemed unwilling to run the risk, with authorities reimposing a lockdown to try and hold back the surge, which could overrun their faltering healthcare services.

India's software capital Bangalore, a city of 13 million, enforced a week-long lockdown while the seaside tourism state of Goa ordered a “people's curfew” until 10 August.

“Too many people were stepping out to meet people at parties," Goa Chief Minister Pramod Sawant complained.

Smaller towns also imposed restrictions amid fears that the infection may have spread deeper into the countryside and that the vast majority of cases was still not known.

“And we are still early in this pandemic with many, many months to go before there is a vaccine,” Jha added.

India ordered a nationwide lockdown on a four-hour notice on 25 March but eased the confinement rules in May as hundreds of thousands lost their jobs and the nation's economy stalled.

But despite the bleak forecast and surging infections, India has resumed international flights.

Aviation Minister Hardeep Singh Puri said India has signed separate agreements with France and the United States for the resumption of services from Friday.

He said similar arrangements with Britain and Germany were being worked out.

"Now we have many demands for air bubbles, but we need to be careful. We should permit that many only that we can handle," the minister told reporters.

An 'air bubble' involves mutually-decided health restrictions to be followed by airlines during international flights.

National carrier Air India will also fly to France and the United States under these so-called “bubbles,” Puri added.

I won’t bow to pressure to make Parliament a ‘rubber stamp o...
43 minutes ago