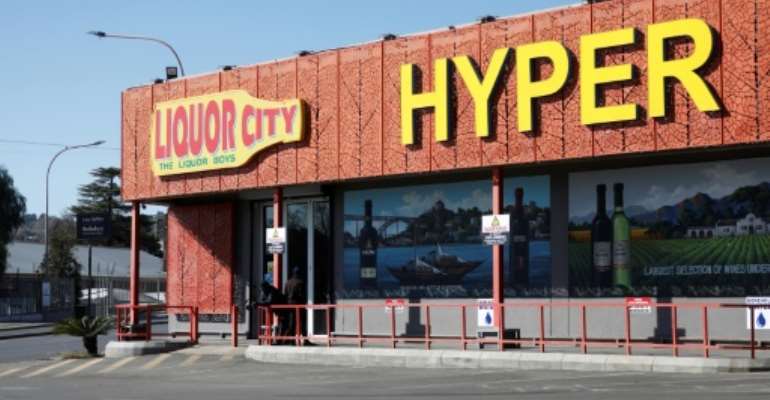 Closed... again: Liquor stores in South Africa have been shuttered for a second time to help ease the strain on hospitals during the coronavirus pandemic. By MICHELE SPATARI (AFP)

South Africa's move to reimpose an alcohol sales ban as its coronavirus epidemic surges has eased pressure on hospital staff but cast a bleak spotlight on the country's booze culture.

In few other countries in the world have COVID-19 and alcohol consumption become so dangerously intertwined.

With 324,221 cases, South Africa is the sixth most infected country in the world for coronavirus, according to an AFP tally.

It also typically ranks among the countries with the highest per-capita alcohol consumption -- a phenomenon, partly fuelled by easy availability of drink, that also carries a high medical cost.

The staggering scale of that bill was brought home after South Africa imposed a rare moratorium on alcohol sales, to go hand-in-hand with a virus lockdown on March 27.

The ban was lifted on June 1 and emergency rooms suddenly teemed with alcohol-related cases: car crashes, gunshot wounds, stab injuries and accidents, which filled beds and diverted manpower from the soaring load of coronavirus patients.

South Africa has the fourth highest tally of coronavirus cases in the world. By Luca Sola (AFP)

On Sunday and without notice, President Cyril Ramaphosa reinstituted the prohibition.

"When the alcohol restrictions were lifted... facilities reported up to 60% of increase in trauma emergencies admissions and up to 200% increase in ICU on trauma admissions," Health Minister Zweli Mkhize said.

The renewed ban should free up just under 50,000 beds in public hospitals over the next eight weeks, according to Charles Parry, director of South Africa Medical Research Council's alcohol research unit.

Pandemic-weary doctors were at times forced to choose between a sick patient with coronavirus and an emergency case of somebody bleeding from alcohol-related trauma, Mkhize said.

"We are hoping that number of trauma cases will come down," said Alaric Jacobs, spokesman for Groote Schuur, a large government hospital in Cape Town, one of the country's coronavirus hotspots.

"There is significant information that allows one to say that South Africa has a drinking problem," said clinical psychologist Sinqobile Aderinoye, who specialises in this matter.

Preparing for the worst: A field hospital in the city of Port Elizabeth. By Michael SHEEHAN (AFP)

"The country needs to address some of the fundamentals of alcohol abuse," such as easy access, aggressive marketing and the legal age of drinking, which currently stands at 18 years, she said.

South Africa has been silently struggling with with a drinking problem for some time.

Mkhize said 31 percent of South Africans over 15 drink alcohol, and according to Parry, 170 people die per day of alcohol-connected problems.

"We let things get so bad that actually we are sixth heaviest nation in terms of the amount we drink per drinker per day -- between five and six standard drinks per day," said Parry. "We clearly have a problem."

Retailers say they were blindsided by government and their losses are starting to mount.

"We all agree that keeping the presure off the health system is important... that every life does matter," said John Woodward of Frogitt and Vonkel, a premium wine retailer, who employs 30 people.

But "the ban and the way it's been introduced and the sweeping blanket nature of it" has put jobs at stake, he said.

"I can't believe that South Africa is so uniquely different that we need such draconian steps," said Woodward.

The National Liquor Traders Council warns some 34,500 small-scale bars known as taverns and 10,000 drinking outlets called shebeens may go bankrupt, placing up to a million jobs are at risk.

"The ban on liquor sales will have dire consequences on the tavern industry," said the council's Lucky Ntimane.

Consumers are also furious -- at least one liquor store has been looted this week.