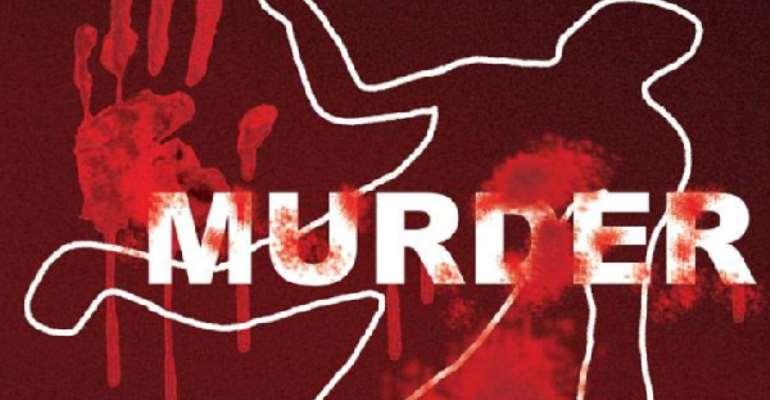 Residents of Mahean in the Ga West Municipality were thrown into a state of shock when a landlord murdered a tenant to death.

The suspect, Agyei Boye who is in the custody of the Amasaman police, was said to have murdered Kofi Abu, 31-year-old, for abusing his 2-year old daughter.

Narrating the sad incident on Angel 102.9Fm, the wife of the deceased told Captain Smart, host of Anopa Bofo, on Thursday, July 16, 2020, her 2-year old daughter was pushed and stepped on by the landlord for crawling near his door.

She said her husband confronted the landlord for stepping on a toddler but led to a scuffle.

The landlord who is an ex-footballer overpowered the tenant and attacked him with a cutlass.

The wife of the deceased screamed for help but to no avail until the Landlord succeeded in killing her husband.

According to her, she pounced on the landlord to stop him from further butchering her husband but unfortunately, the landlord slashed her head with the cutlass.

“The landlord stepped on my 2-year-old daughter who was crawling to his doorway. My husband confronted him on why he did that to the toddler and the landlord attacked him haphazardly with the cutlass and slashed every part of his body. He later dragged my husband to a nearby kiosk and continued the attacks. I tried to stop him from attacking my husband and he slashed my head with the cutlass. I shouted for help but no one could hear me” She told Captain on Angel FM

The Amasaman Police are currently investigating the incident.