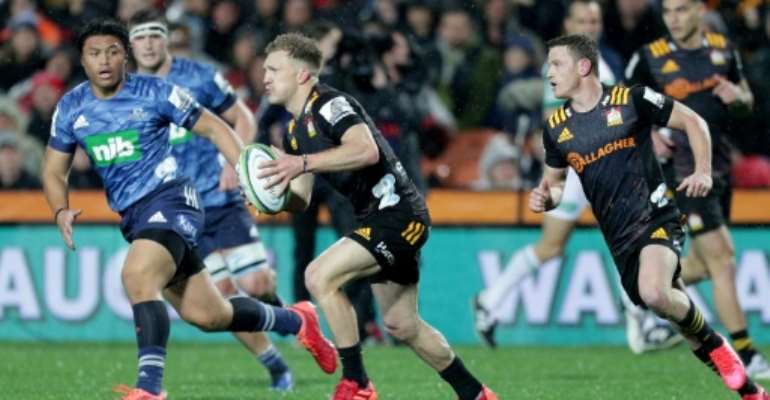 New Zealand has been playing a domestic version of Super Rugby in front of large crowds. By DAVID ROWLAND (AFP)

New Zealand Rugby revealed plans Friday to cull South African teams and Argentina's Jaguares from Super Rugby next year, in what would be a ruthless shake-up for the struggling competition.

NZR's planned revamp of the flagship southern hemisphere club tournament would contain New Zealand's five existing teams, two to four from Australia and one newcomer from the Pacific, giving the sprawling competition a strong trans-Tasman focus.

South Africa, which co-founded Super Rugby in 1996 with Australia and New Zealand, would see its five teams dumped, along with the Buenos Aires-based Jaguares.

NZR chief executive Mark Robinson blamed the COVID-19 pandemic for the "extremely tough" decisions made around the new competition, saying it meant long-distance travel was impossible.

"We have a huge amount of sympathy for what's happening to rugby in Argentina and South Africa and their inability to play at the moment and the uncertainty that's creating," he said.

The coronavirus halted this year's Super Rugby season in March, forcing New Zealand and Australia to set up domestic versions of the competition, while South African clubs and the Jaguares remain sidelined.

Rugby Australia acknowledged NZR's plans in a brief statement, recognising the need to review Super Rugby's "sustainability and practicality" in the current environment.

RA will want all four of Australia's existing Super Rugby teams included after undergoing bitter internal ructions when the Perth-based Western Force was dropped in 2017.

However, it may have little choice, with RA chairman Hamish McLennan last week saying the relationship between the two unions was "a bit master-servant", with New Zealand holding the whip hand.

Proposals for a Pacific team in the past have suggested players from Fiji, Samoa and Tonga who could all be based in Auckland, but Robinson declined to say what NZR had in mind.

He was also unable to provide details of whether governing body SANZAAR (South Africa, New Zealand, Australia and Argentina Rugby) would oversee the new competition, the club ownership structure or even whether it would be called Super Rugby.

'Puts me to sleep'

Super Rugby was launched in 1996, emerging from the amateur South Pacific Championship as a 10-team professional competition featuring clubs from Australia, New Zealand and South Africa.

Its 25th anniversary season this year has not been one to celebrate, as the COVID-19 pandemic not only halted cross-border competition but brutally exposed its flawed format.

With 15 teams in five countries straddling 16 time zones, it has long been criticised as unwieldy, expensive to run, exhausting for elite players and difficult for fans to follow.

Once lauded as the best club competition in the world, Super Rugby's problems began when administrators launched an ambitious expansion programme.

The number of clubs ballooned to 18 at one stage as extra teams were added in Japan, Argentina and previously unrepresented areas of Australia and South Africa.

There was even talk of going global with franchises in North America and Europe, but it soon became apparent the model was unsustainable.

Playing resources were stretched among too many teams and fans began to lose interest in lop-sided matches such as the Tokyo-based Sunwolves' 94-7 humiliation by the Golden Lions in 2017.

A confusing conference system did not help, nor did the competition's giant geographic footprint, which meant supporters wanting to follow their team's fortunes on the road had to tune into games in the middle of the night.

Outspoken England coach Eddie Jones summed up the problems facing Super Rugby in 2016, when the Australian remarked: "Some of the games put me to sleep.

Robinson said the NZR blueprint was a chance to revive Super Rugby.

"We want teams that are competitive and that fans will want to watch go head-to-head, week-in, week-out," he said.