By Phil Hazlewood with AFP bureaus 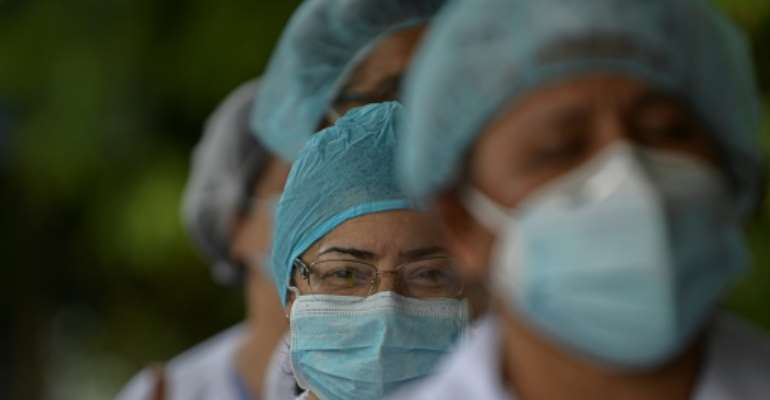 The US, UK and Canada have accused Russia of trying to steal coronavirus vaccine research as the pandemic surges across the world, with Brazil announcing it has surpassed two million confirmed cases.

The virus has killed more than 585,000 people, infected more than 13.6 million and crippled the global economy since emerging late last year, and the world's hopes have turned to a vaccine to end the onslaught.

In the latest positive sign, British media reported on Thursday that an Oxford University trial had shown its prototype vaccine generated an immune response against the virus.

World toll of coronavirus infections and deaths, as of July 16 at 1900 GMT. By (AFP)

The agency said it was "almost certain (95%+) that APT29 are part of the Russian Intelligence Services" and its targeting of researchers was "highly likely (80-90%)" to "collect information on COVID-19 vaccine research".

The US, UK and Canada all accused Russia in a joint security advisory.

Moscow denied any involvement, with Kremlin spokesman Dmitry Peskov saying: "Russia has nothing to do with these attempts."

Relatives of Ecuadoran Gardenia Rivadeneira, who died from COVID-19 at the beginning of the pandemic, mourn after receiving her freshly identified remains in Guayaquil, Ecuador, on July 16, 2020. By JOSE SÃNCHEZ LINDAO (AFP)

The dispute came as the need for a vaccine was underscored once more with Brazil, the second hardest hit country in the world, passing the bleak milepost of two million coronavirus cases.

The number of deaths recorded in the country are now over 76,000.

Experts say the true case load in Latin America's largest economy, home to some 209 million people, could be understated by as much as a factor of ten and fatalities as much as twofold.

Like the US, which has the world's biggest epidemic by far, Brazil is led by a populist leader, Jair Bolsonaro who has downplayed the virus and railed against restrictions.

Bolsonaro was himself diagnosed positive a week ago.

The manager of a men's clothing store waits for customers in Mexico City, on July 16, 2020. By Alfredo ESTRELLA (AFP)

The United States has recorded by far the most deaths and infections in the pandemic, setting a record on Wednesday with more than 67,000 new cases in 24 hours.

Florida is the country's new epicentre, and is shaping up as a key battleground in a partisan-tinged fight playing out nationally over reopening schools in the fall.

US President Donald Trump meanwhile has been escalating a conflict with Anthony Fauci, the country's top infectious disease specialist, but has so far stopped short of firing the scientist from his coronavirus task force.

Fauci's warnings on the dangers of reopening states too fast are at odds with Trump, who has placed his re-election hopes on declaring victory over the virus and jumpstarting the economy.

While the virus runs rampant across the US and Latin America, the Red Cross warned that South Asia is fast becoming the next epicentre.

India is on course to hit one million cases in the coming days and the 125 million people in the impoverished Bihar state, neighbouring Nepal, started a new 15-day lockdown on Thursday.

Badly-hit Spain pauses to honour its tens of thousands of victims at a state ceremony. By Juanjo Martin (POOL/AFP)

"We have not faced such a situation in my life before, it is really a horrible experience," housewife Radhika Singh said in Patna, the capital of Bihar, where all schools, clubs, temples and non-essential businesses were ordered closed.

Governments in many other countries have been forced to reimpose restrictions as COVID-19 refuses to fade, including Spain, which has locked down a northeastern area as it fights more than 120 active outbreaks.

Spain honoured its more than 28,000 virus dead at a solemn state ceremony joined by bereaved families and top EU and World Health Organization figures on Thursday.

France meanwhile said it will make mask-wearing compulsory in indoor public spaces from next week after an uptick in infections.

In Italy, the first European country to lock down, the official death toll topped 35,000.

In north Africa, Algeria is planning a law to protect health workers after an increase in "physical and verbal attacks" since the country's outbreak began, as it registered another record number of daily cases.

On Monday, the director of a hospital around 125 kilometres (78 miles) southeast of the capital jumped out of a window to escape the angry family of a patient suspected of having died from the COVID-19 disease.