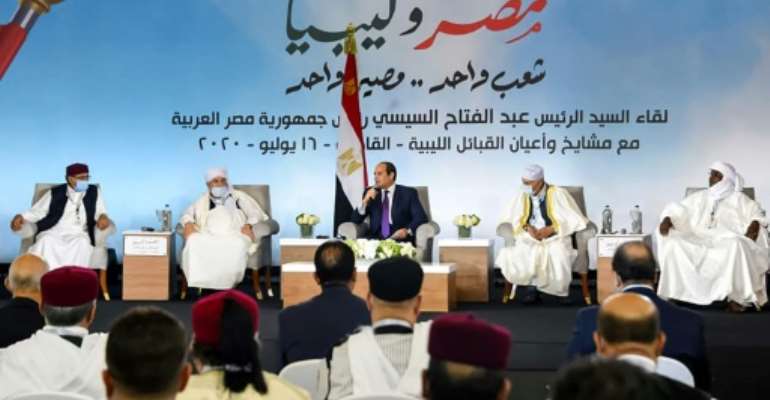 Egypt's president said Thursday that his country "will not stand idle" against threats to the national security of Egypt and Arab countries, in a meeting with tribal leaders from eastern Libya.

His comments came days after the eastern-based Libyan parliament, aligned with strongman Khalifa Haftar, gave in-principle support to a threatened Egyptian military intervention in the country.

Since 2015, a power struggle has pitted the UN-recognised, Tripoli-based Government of National Accord (GNA) against forces loyal to Haftar, who is based in eastern Benghazi.

The strongman is mainly supported by Egypt, the United Arab Emirates and Russia, while Turkey backs the GNA.

President Abdel Fattah al-Sisi said Egypt "will not stand idle in the face of any moves that pose a direct threat to the national security not only of Egypt but also that of Libya" and the region, according to a presidency statement.

Egypt's president made the remarks during a meeting in Cairo with tribal leaders from the eastern city of Benghazi.

The tribal leaders "declared that they fully authorise the president (Sisi) and the Egyptian armed forces to intervene to protect Libyan sovereignty", the statement added.

Last month, Sisi had warned that advances by forces loyal to the GNA could prompt an Egyptian military intervention.

He threatened to send in his army if GNA forces captured Sirte, located more than 800 kilometres (500 miles) from the Egyptian border.

The GNA, which has been pushing to take the strategic city from Haftar, denounced Sisi's statements as a "declaration of war".

Cairo considers that a push on Sirte -- a gateway to key oil fields -- would be tantamount to crossing a "red line" and has called for talks between Libya's rival factions.

Ankara and the GNA have called on Haftar to withdraw from Sirte and negotiate a ceasefire.

Egypt's efforts on the Libya crisis seek "to activate the free will of the Libyan people for a better future", Thursday's statement said.

In June, Cairo proposed a peace initiative calling for a ceasefire, withdrawal of mercenaries and disbanding militias in the neighbouring country.

The GNA and Ankara dismissed the plan, which Sisi unveiled with Haftar at his side.

Libya has been mired in chaos since the 2011 uprising that toppled and later killed longtime dictator Moamer Kadhafi.