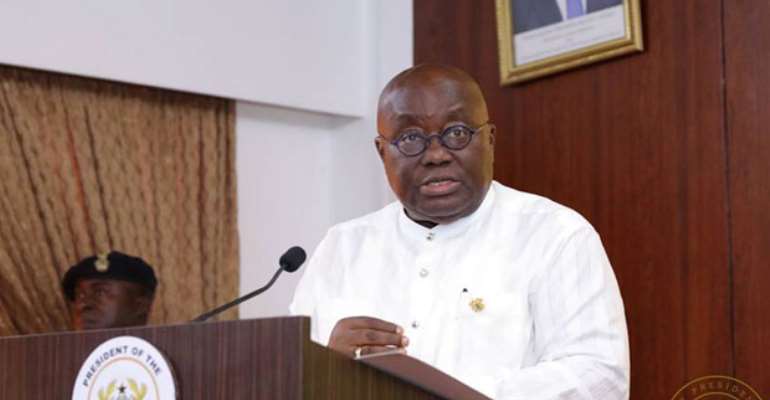 “Always keep your words soft and sweet; just in case you have to eat them.” - Oprah Winfrey

AS CAPTURED BY THIS PAPER, President Nana Addo Dankwa Akufo-Addo “has urged members of the communication team of the ruling New Patriotic Party (NPP) to focus their messages to the electorate on the achievements of the government and not on gender-based issues, particularly attacks on any female politician.”

It was the first public engagement the President had with key members of his communication advisory team, after coming out of his self-imposed 14-day isolation. The President noted the quality of achievements of his government in various areas— health, education, infrastructure, across the country—which have virtually affected everyone in the country. He emphasized: “There is no part of Ghana that can say that somehow rather they have been left out in the programmes of development of this government. This has to be a critical aspect of our outreach”. No one needs any telling that the 2020 general election in December will be a contest between President Nana Addo and ex-President John Dramani Mahama of the main opposition National Democratic Congress. It is safer to bet that all the other aspirants to the high office, including Akua Donkor whose running mate is said to be Adakabre Frimpong are peripherals. Hence the communicators must always compare and contrast records and achievements between them, especially what Ghanaians directly or indirectly gained during the time each of them managed the economy. Nana Addo reiterated: “It is very critical because without that difference, it is very difficult to measure the quality of the achievements.”

The President had a word on the need for strict adherence to the Covid-19 safety protocols aimed at curbing the spread of the virus which has become a major source of worry for the government and many Ghanaians. “We are a government and it is very important that aspect of our concern about the need for our people to be safe comes out constantly in virtually everything that we say. People have to take the protocols seriously.” Meanwhile, Dr. Frank Ankobea, the President of the Ghana Medical Association, has reported that 779 health workers across the country have contracted Covid-19 with nine fatalities. According to him, of this number, nurses and midwives are the hardest hit, but medical doctors have paid the heaviest price in terms of fatalities. Besides those health workers whose Covid-19 statuses have been confirmed, a large number of health workers are currently in isolation, waiting for the outcome of tests after being exposed to the virus at their various workplaces. It needs no telling that the situation is generating fear among the health workers. The joint statement issued by the four groups: Ghana Medical Association (GMA), the Ghana Registered Nurses and Midwives Association (GRNMA), the Health Service Workers Union (HSWU) and the (GHOPSA) asked the government to take swift and practicable measures to avert the “imminent calamitous ramifications” of the situation. There was a reference to “motivational package”, and the statement noted: “It is important to state that all health facilities are highly infectious zones, and for that matter anybody working there is in danger. Considering that trend, it is fair that all health workers are considered for the motivational package.” The stories monitored from countries across the world suggest that decisions taken as precautionary measures keep changing from time to time, and no one can fault a government for a particular measure adopted at a particular time. In the United States, for example, beaches are opened and closed to the public in various states, including California. In South Africa, the sale of alcoholic beverages and cigarettes is banned.

The President urged the members of the communication team to help educate Ghanaians on the need to register and vote because that is part of their civic responsibility. He was not encouraged by the turn out as reported by the Electoral Commission; he urged the communicators to talk to and encourage more people to register and vote, saying, “We want everybody who is eligible to register to have the opportunity to do so within time, and we have to keep that as part of our narrative.”

There is no doubt that the NPP can boast of very talented communicators. Take a man called Adomako Baafi. He has in stock a pile of clear-cut examples to buttress any argument he makes. This is the type to emulate. Stress a point, make convincing arguments, sans insults. Some citizens have decided to tune in to particular stations on television and radio, including those that show wild life and sports because of the education and joy they receive; others have decided to avoid a heartbeat by staying away from particular stations and persons.

Some of these political communicators fail to note the names they are carving for themselves. They fail to pick a cue from the 'Montie 3' who suffered imprisonment for the use of vulgar language on radio. Besides libel, they suffer ostracism by even their own party members. Is it surprising that some of the communicators are negatively labelled? Their youthfulness and abrasiveness goad them; their sudden rise to notoriety (instead of fame) gives them the erroneous feeling of having risen to the top because of their sagacity among their peer groups and mates. You may remember how J.J. Rawlings described some of them in his own party: “…babies with sharp teeth; they can bite.”

Any discerning listener will wonder whether some of the communicators had any home-training. Do they have parents? What advice do their parents give them? Are they prepared to listen to their 'elders'? Who are the 'elders' when by their sudden rise to certain positions, they can ride rough-shod above them? For some of us, we have seen many of these things before: the young ones have a long way to go: ten, twenty, thirty, forty, even fifty years—being now aged around thirty.

From the President's admonition, NPP communicators are being urged not to learn from the communicators of other political parties and not to justify their actions by saying “a tooth for a tooth” or that “violence begets violence.” Those communicators from the Danquah-Busia-Dombo tradition have to set the pace, so some people think. They urge the communicators to leave Professor Jane Naana Opoku-Agyemang alone. The NDC have the liberty and political space to select any person of their choice to be a running mate to Mahama. If Prof. Jane was their mother, they would be proud of her achievements. For a lady to have risen on the academic ladder to head a university is no mean achievement. A line in the July 10, 2020 editorial of this paper enthuses us: “…The New Patriotic Party has not hidden its love for showcasing what women can do, having achieved an unparalleled and verifiable record of this feat.” Let us accord our women the respect they deserve—whether they are in our political party or outside of it; whether we share political ideas with them or not; whether they give our teachers chalk or not; whether they give our teachers-in-training allowances or not…” Shakespeare in Henry 1V admonishes us, “Give the devil his due”.