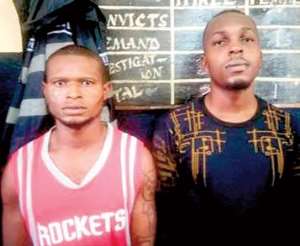 Ghana arguably suffers more from the drawbacks of regional economic blocs than its neighbours in the Economic Community of West African States (ECOWAS) notwithstanding the motley of advantages engendered by such sub-regional bodies.

In recent times, there has been a surge in crimes committed by our ECOWAS neighbours. While some of these crimes are ordinary and could be easily swept under the carpet, others, on the other hand, have made scary headlines because of their national security fallouts.

One of the stories in yesterday's edition of this paper was about two of our ECOWAS neighbours engaged in kidnapping and cybercrime.

Without seeking to remind ourselves of the pain of the Takoradi girls who were killed by Nigerian suspects whose case is now in court, that painful story when juxtaposed against subsequent equally worrying ones should be enough to trigger xenophobia among some of us, much as such tendencies should not be encouraged.

There are wonderful Nigerian ladies and gentlemen in the country who are engaged in lawful activities. Unfortunately, the deeds of a few of their compatriots tend to smear the many good ones with scum, a rather unfortunate development which we would have rather was not the case.

The brazenness with which these criminals perpetrate their deeds leaves us with no option than to conclude that they find us meek and easy to deal with.

The good Nigerians who live in this country should assist the law enforcement agents to flush out the bad ones among them. This may be a tall order; we do acknowledge though. Suffice it to state, however, that where intelligence is available and we do not have doubts that in some instances they do, these must be shared with the law enforcement agents for the necessary actions to be taken.

Ghana's hospitability is legendary but when matters begin to take this turn, we have reason to express concern as we are doing.

The abduction of two Canadians in Kumasi last year comes to mind. We have had enough of such negative activities by some of our ECOWAS neighbours.

Landlords too should be proactive in matters of security. The location where the two suspected kidnappers lived at Gomoa Pomadze in the Central Region is definitely the property of somebody who should have taken pains to find out the occupation of his or her tenants. Had that been done, we are confident that the suspects would have long been stopped in their tracks.