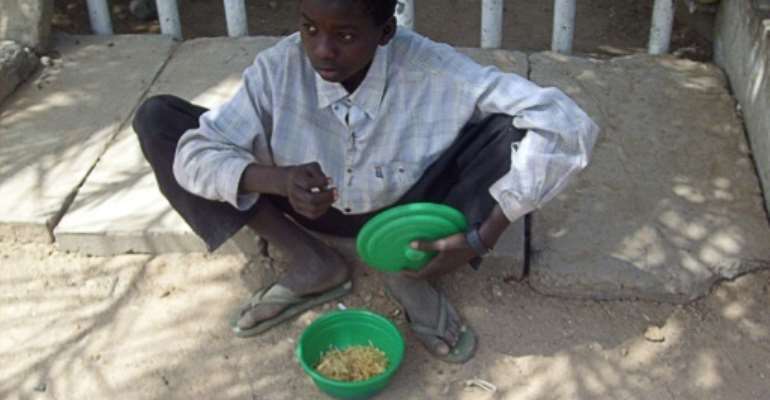 Many street children in the northern Nigerian city of Kano are enrolled in informal Islamic schools which force youngsters to beg, say critics. By AMINU ABUBAKAR (AFP/File)

Two dozen boys read verses of the Koran aloud on the dilapidated veranda of one of the thousands of informal Islamic schools studding northern Nigeria's biggest city Kano.

To some in this conservative region, the centuries-old system -- known as almajiri locally -- is an invaluable bastion of tradition and religious learning.

But critics have long condemned the institutions for squalid conditions, forcing children to beg and denying them a proper education.

Now the spread of coronavirus has sparked renewed efforts from the authorities to close down the schools and send the pupils home to their families.

Governors of 19 states across northern Nigeria in May announced a ban on the informal Islamic centres over fears they would become hubs for spreading the disease.

"We are prohibiting that system. We want every child to be with his parents," Kano governor Nasir Ahmad El-Rufai explained recently during a virtual conference on the issue.

He said the aim was ultimately to replace the schools with a hybrid Islamic and modern education system regulated by the authorities.

"The COVID-19 pandemic provided a window of opportunity to have the almajiris in a fixed location, document them, test them and repatriate them."

Leaders in Nigeria have repeatedly spoken about the need to reform the system -- but so far there has been little progress toward changing the deeply ingrained practice.

For generations it has been tradition in Muslim-majority northern Nigeria for parents to send their sons from as young as six to local clerics to learn the Koran.

The lessons are free but the children must fend for themselves -- meaning many end up begging in the streets or doing menial jobs.

Crowds of young boys pleading for money or food in tattered clothes are a common sight on Kano's roads.

They often sleep rough or on the floors of the overcrowded dormitories provided by their teachers with poor or no sanitation.

Scandal: Hundred of young men were rescued by police last year from a school in Kaduna, northern Nigeria, where many were chained and abused. By - (AFP)

Last year there was a brief outcry when police raids uncovered hundreds of men and boys trapped in atrocious conditions at such facilities, which often double as so-called "rehabilitation centres" for drug users.

The United Nations estimates that in Kano state alone -- with a population of some 14 million -- there are some 1.5 million child beggars, but local officials say the number could be twice that.

Across the whole of northern Nigeria it is reckoned there are millions more.

After the ban was announced in May officials in Kano and nearby Kaduna state began rounding up child beggars, students and teachers.

The authorities in Kano said they were determined to send back over 250,000 boys to their parents.

But the moves drew protests from clerics -- who complained the government's response was heavy-handed.

"We see the recent ban as a pretext to destroy the traditional Koran education system," said Jibril Salihu, who runs one of the schools.

"It is not possible to ban or reform a system that has existed for centuries overnight."

Awwalu Abdullahi was brought to an almajiri by his parents five years ago and insists he wants to finish learning the Koran.

"We feel the government is unfair to us," Abdullahi, now 20, told AFP.

"If we are taken back home we will join the league of our peers who are there living in illiteracy."

The clerics' protests appear to have put the brakes on the authorities.

So far only around 1,500 pupils have been sent home from Kano -- and the state government has said schools could remain open if they provide proper board and lodging.

Yusuf Hassan, who runs the Almajiri Foundation charity, agreed the system needs reforming but insisted banning it was not the solution.

"It is the right step but in the wrong direction," he said.

"Even if you take the children back to their parents nothing will change for the kids because they don't have schools in their communities."

Child beggars queue for food in a rich neighbourhood of Kano. By AMINU ABUBAKAR (AFP/File)

A major obstacle is the woeful condition of Nigeria's state school system.

Primary education is nominally free and compulsory in Africa's most populous country, but some 10.5 million children aged 5-14 are permanently out of school.

Successive governments have been accused of severely underfunding the sector -- and the system is in no state to handle a sudden influx of millions more children.

"The public schools are saturated, classes are overpopulated and teachers are inadequate."

You can’t dictate to Akufo-Addo; stop the disrespect – Sefwi...
51 minutes ago