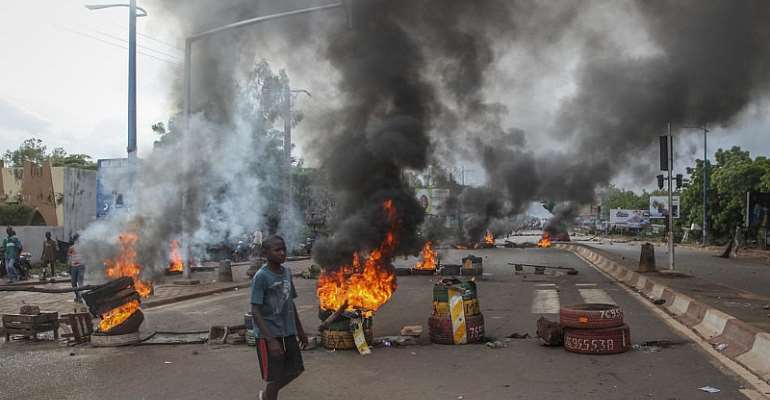 Former Nigerian president Goodluck Jonathan landed in Bamako on Wednesday to lead mediation efforts to find a solution to the crisis in Mali. The country has been hit by ongoing protests calling for the resignation of President Ibrahim Boubacar Keïta, with recent demonstrations marred by violence and a crackdown by security forces.

Jonathan met with President Keita on Wednesday evening for talks, according to Bamako correspondent Serge Daniel. The former Nigerian president was appointed head of a mediation team acting on behalf of Ecowas, the West African regional bloc.

A Gulfstream 550 jet, belonging to the Nigerian authorities, took off from Abuja, Nigeria, stopped in Niamey, Niger and then touched down at Modibo Keita airport in Bamako on Wednesday evening, RFI understands.

Jonathan had been selected as envoy in consultation with Niger's President Mahamadou Issoufou, the Nigerian press reported. Experts in constitutional law from Benin, Togo and Cote d'Ivoire are also expected to be involved in mediation, reported correspondent Daniel.

“I'm not sure what Goodluck Jonathan can really contribute to this, Nigeria has struggled to play a diplomatic role in crisis situations in Mali since the coup in 2012,” said Andrew Lebovich, an expert on Mali at the European Council on Foreign Relations (ECFR).

The former Nigerian president peacefully handed over power to Buhari in 2015 following his defeat in the elections. Since then he has led several electoral observation missions for the African Union.

Crackdown by security forces
More protests are expected on Friday, with the opposition calling for Friday prayers to pay homage to the victims of the violence and crackdown on protesters.

Eleven people were killed and 124 injured, according to official figures, following four days of violence in the Malian capital that began on Friday with protests by the M5-RFP group, an opposition coalition of politicians, civil society and religious leaders.

Demonstrations since 5 June have urged Keita to step down over problems with insecurity, government corruption and economic hardship.

It emerged that the authorities deployed the Antiterrorist Special Forces (FORSAT) in response to the demonstrations. Some protesters had erected roadblocks and attacked public buildings.

The letter was addressed to the minister of security and civil protection, instructing the official to carry out an investigation determining the reasons for deploying FORSAT and asking who gave the antiterrorist squad the green light to be deployed.

But the letter was addressed to a ministerial post that is currently vacant, raising the question of who would carry out such an investigation.

“There's a growing recognition including from parties that are normally more closely affiliated with the government that they have to have a serious, credible investigation into the killings,” said analyst Lebovich.

The extent of the violence last weekend “definitely struck a chord among the Malian political elite and of course among the citizenry as a whole”, the ECFR expert added.

Compromise?
A joint statement from the Ecowas bloc, African Union, EU and UN on Sunday expressed concern about the recent violence, encouraging the government in Bamako to pursue dialogue.

“Resignation is the watchword here - we've come to believe today that Mr Ibrahim Boubacar Keita has neither the physical capacity, nor the intellectual capacity to manage the country,” opposition leader Mountaga Tall told reporters, according to the AFP news agency.

Concessions from the government, such as dissolving the country's constitutional court, have so far been judged to be insufficient by the M5-RFP opposition.

“I'm not sure there's really a concession that the government can make that would actually satisfy people, particularly after the violence last weekend,” said Lebovich. “Publicly, it's going to be very hard to get the opposition to actually accept any real compromise.”