By Menna Zaki and Hager Harabech 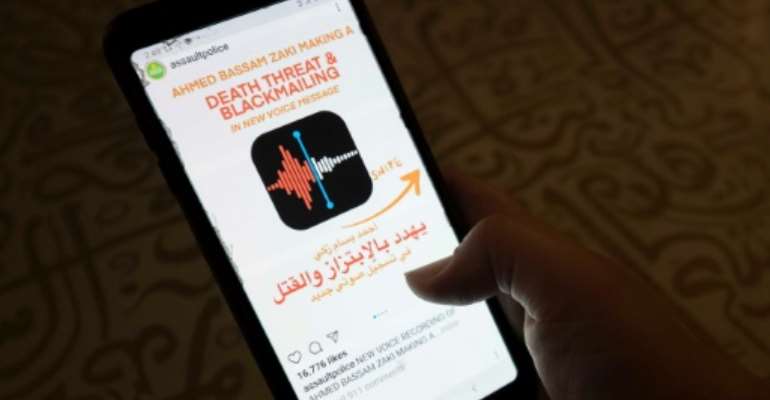 A woman in Egypt checks an Instagram account for reporting allegations of sexual harassment and misconduct. By Khaled DESOUKI (AFP)

Egypt has seen a strong resurgence of the #MeToo movement after dozens of women made shocking claims of sexual abuse and assault by a member of the country's wealthy elite.

Amid a campaign unprecedented in its intensity in the deeply conservative country, state and religious authorities have started to take a firmer stand.

The latest outpouring of anger, on the Instagram account "Assault Police", centres on allegations against Ahmed Bassam Zaki, a 22-year-old former student of some of Egypt's most elite schools and universities.

They have ranged from claims that he took part in a rape at the gym hall of a gated residential community to screen-grabs showing salacious messages and blackmail of women. Some alleged incidents involved girls as young as 14.

Police on July 4 arrested Zaki who, according to prosecutors, has confessed to assaulting at least six girls including one aged under 18 and to blackmailing the victims.

In this file photo from 2013 protesters hold up placards and shout slogans during a demonstration against sexual harassment in Egypt's capital Cairo. By Khaled DESOUKI (AFP/File)

While Zaki is awaiting trial, his case has kicked off a wave of other complaints in a society where, United Nations surveys say, most women have experienced catcalling, pinching, groping or worse.

"Women immediately jumped at the opportunity to vent and tell their stories," the Instagram page administrator told AFP, requesting anonymity for fear of reprisals.

"It is now bigger than Ahmed Bassam Zaki. We receive a dozen messages per minute from girls and women telling of personal incidents of harassment, abuse and rape, some dating back years."

Following Zaki's arrest, the campaign has swept up other well-known figures.

One of them is Mohamed Hashem, a writer and founder of a top publishing house, who was detained over harassment allegations but later released on bail.

The current momentum builds on earlier #MeToo waves in Egypt, the latest in January following a mob assault on two women in Mansoura, north of Cairo, on New Year's Eve.

The Zaki case highlights that sexual assault and harassment -- widely perceived to be more prevalent among the poorer classes -- pervades all levels of society.

A protester at a 2013 rally in Cairo holds a placard pledging an 'uprising of women in the Arab world'. By Khaled DESOUKI (AFP/File)

Zaki is a former student of the prestigious American University in Cairo. He briefly went on to study in Barcelona but was expelled this month after a claim of online harassment by another student.

"We are talking about Class A, the creme de la creme of society who enrol in universities and schools worth tens of thousands of pounds annually," said Fathy Farid of Aman, an initiative against gender-based violence.

Campaigners hope the case will help shift attitudes in Egypt, which only criminalised sexual harassment in 2014.

Women in Egypt are often reluctant to speak out about sexual harassment, fearing public shaming and being blamed for wearing "provocative" clothing.

In stark contrast to the #MeToo revival, Egypt has also seen an ongoing campaign targeting female TikTok influencers accused of "indecency and immorality".

Among recent cases is that of a 17-year-old girl who was arrested after posting a TikTok video in which she said she had been gang raped by a group of young men.

These girls "suffer discrimination and bullying" and their arrests "are part of violence against women because they come from lower classes," said lawyer Intesar al-Saeed.

Campaigners hope to shift attitudes in Egypt, which only criminalised sexual harassment in 2014. By Khaled DESOUKI (AFP/File)

The Instagram group administrator also reported "a lot of these messages" attacking the women, but added that "they are nothing compared to the messages of support".

As more online testimonies have kept pouring in, the National Council for Women said it had received at least 400 complaints and enquiries on sexual harassment and abuse.

The government of President Abdel Fattah al-Sisi has taken some action.

His cabinet has approved amendments, yet to be passed by parliament, to the criminal code that would grant the right of anonymity to victims of sexual assault.

The Dar al-Iftar, in charge of issuing religious edicts, slammed those who blame women for wearing provocative clothing as "sick".

The Instagram activist said the goal is, "if we're not forced to shut down the account for any reason, to turn Assault Police into a platform for women to share their stories.

"We are optimistic about making this country a safer place for women."