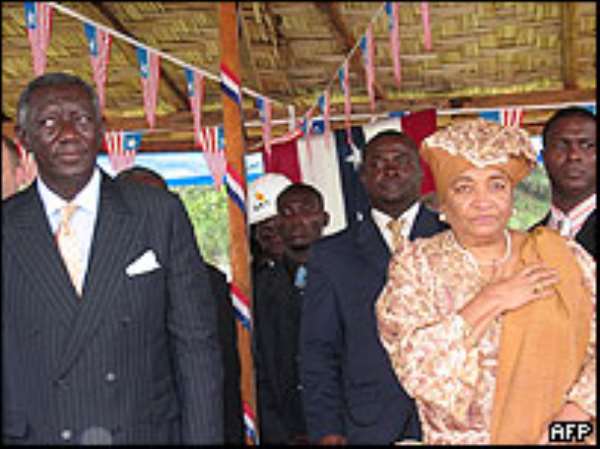 A fire has broken out in Liberia's presidential offices as President Ellen Johnson-Sirleaf was about to host a gathering of visiting presidents. Firefighters were battling on Wednesday afternoon to control the blaze at the Executive Mansion, the BBC's Jonathan Paye-Layleh reports from Monrovia.

The leaders of Ghana, Ivory Coast and Sierra Leone were there when the fire broke out, but escaped unharmed. No injuries are reported but the blaze marred independence day celebrations.

The blaze came just after the president switched on generator-powered street lights in the capital, Monrovia, which has lacked electricity for 15 years.

On Tuesday, piped water was made available in the capital for the first time in many years.

Mrs Johnson-Sirleaf had promised to bring electricity to the whole of Monrovia within six months of assuming office in January.

Ghana's President John Kufour joined her to switch on the street lights in Congo Town, an eastern suburb of Monrovia on Wednesday morning.

As lights dispel darkness, so with the restoration of power to Liberia the period of gloom and darkness engendered by political turmoil must come to an end.

Ghanaian technicians have helped install the street lights for the event, and the generators and poles came from Ghana. "Ghana is proud to have been able to render this support to you and your nation," Mr Kufour said to Mrs Johnson-Sirleaf.

"As lights dispel darkness, so with the restoration of power to Liberia the period of gloom and darkness engendered by political turmoil must come to an end," he continued.

As Liberia celebrates 159 years of independence, every effort was being made to ensure visible signs that life in the capital is improving, our correspondent says.

In another landmark event, parts of the capital got access to pumped water for the first time in 15 years on Tuesday.

But after decades of misrule, Liberia's road network is still in ruins, an there is no national telephone network and no national electricity grid.

President Johnson-Sirleaf admitted that she had expected to do more by this stage, but contracts and plans already in place were difficult to change.