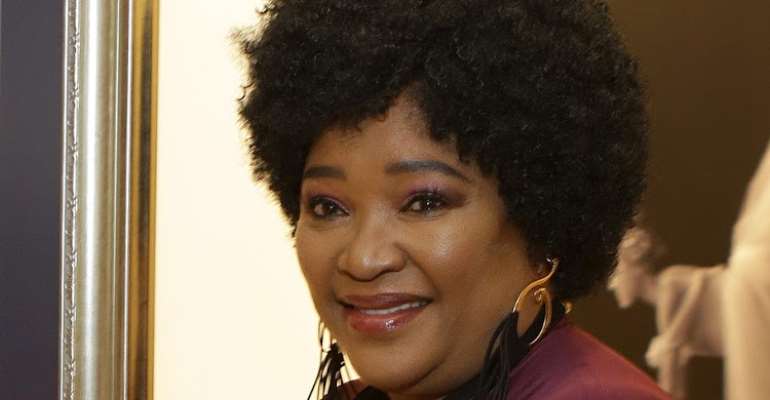 Zindzi Mandela, the youngest daughter of the late President Nelson Mandela and his ex-wife Winnie Madikizela-Mandela (also deceased), has passed in Johannesburg. She was 59.

Described by the Johannesburg Times newspaper as a 'sensitive, loving soul', the late Zindzi had been South Africa's ambassador to Denmark since 2015. A beautiful lady who inherited the good looks of her mother, Winnie, she was twice married and left behind four children – Zoleka, Zondwa, Zwelabo and Bambatha.

Details of the circumstances of her “sudden death” in a Johannesburg hospital on 13 July 2020, were sketchy at the time of writing. The Mandela family were expected to release more information on the sad event later. Meanwhile, tributes have been pouring in from political and civic leaders, praising the role she played as a fighter in the struggle that enabled South Africa to become a non-racist country in May 1994.

South Africa's Minister for International Relations & Co-operation, Ms Naledi Pandor, said she had learnt of the death with shock. Expressing condolences to the Mandela family, friends and colleagues, Pandor said: “Zindzi will not only be remembered as a daughter of our struggle heroes, Tata Nelson and Mama Winnie Mandela, but as a struggle heroine in her own right. She served South Africa well.”

Labour movement leader, Mr Zwelinzima Vavi, said he would remember Zindzi as a “young lady who was a woman full of confidence, had lots of guts and a warm and big heart. “She became hope to millions of the youth during the struggle and was in the forefront of the liberation to make South Africa ungovernable. She was fearless and served as an inspiration,” Mr Vavi said.

Zindzi was born on 23 December 1960 – which means that most probably, her activist mother was probably carrying her at the time of the most notorious atrocity carried out by the apartheid regime against Africans, namely, the shooting dead of 69 Africans at Sharpeville, on 21 March 1960, as they protested against the country's obnoxious “pass laws”.

Most of those killed were shot in the back, as they fled from a charge by armed police. It was reported at the time that the police had used “dum-dum” bullets (ammunition that made a small entrance in the human body but produced wounds that expanded into a large hole at the point of exit.)

In recognition of Zindzi's indomitable spirit, the UDM leader, Mr Bantu Holomisa, described her as a “fighter” who had fought from the early days of her life. “We will also remember her during the time when she was campaigning for [President Nelson] Mandela to be released. She was vocal. My condolences to the family and her children and sisters.”

The opening words of the autobiography of Zindzi's eldest daughter, Zoleka [entitled When Hope Whispers] read: “By the time I was born, on April 9 1980, my mother knew how to strip and assemble an AK-47 [rifle] – in exactly 38 seconds.”

Zindzi is best remembered for her defiance of all forms of oppression and injustice, which she retained throughout her life. Most recently, she had been voicing her support for accelerated land reform.

Her most notable, early foray into the spotlight, in her own right, in February 1985, was when she read to a huge gathering of Africans at Jabulani Stadium, in Soweto, her jailed father's speech rejecting the conditional offer of freedom made to him by the President of South Africa the time, P . W. Botha.

Zindzi was born on December 23, 1960 in Soweto. Her father’s 27-year jail term began 18 months after her birth. Her mother's banishment in 1977 to an isolated locality called Brandfort, for eight years, further deprived Zindzi of a normal upbringing and education. However, she was eventually sent to Swaziland, where she finished her secondary education. In 1985 she earned a B.A. law degree at the University of Cape Town.

Zindzi's diplomatic career dates back to when she began training as head of mission designate in Copenhagen in August 2014. She took up her posting as ambassador on June 17, 2015.

On “normalization” of politics in South African in 1994, Zindzi became involved in philanthropic work with several organisations, while also holding positions as director and president of several corporations.

Her political role included serving as deputy president of the Soweto Youth Congress; member of the Release Mandela Campaign; underground operative of the ANC armed wing, Umkhonto we Sizwe, working with the communities of Weilers/Orange Farm to launch the first ANC branch there with struggle leader ,Walter Sisulu in the 1990s, and operating in the MK Veterans' Association in the Lesley Moatshe branch.

When that marriage was dissolved, she remarried, on 2013, to former South African National Defence Force member Molapi Motlhajwa. That marriage too ended after about a year.

I met Zindzi when I attended the swearing-in of Nelson Mandela as President of South Africa in May 1994. Chatting to her at a party in her home, she proved to be very knowledgeable about Pan-African issues. She had the looks of a queen but bore herself like a humble servant of the people. No-one who met her will ever forget hearing divine smile and melodious, affectionate voice.

RIP Zinzi. Madiba and Winnie are waiting to welcome you into their loving arms.