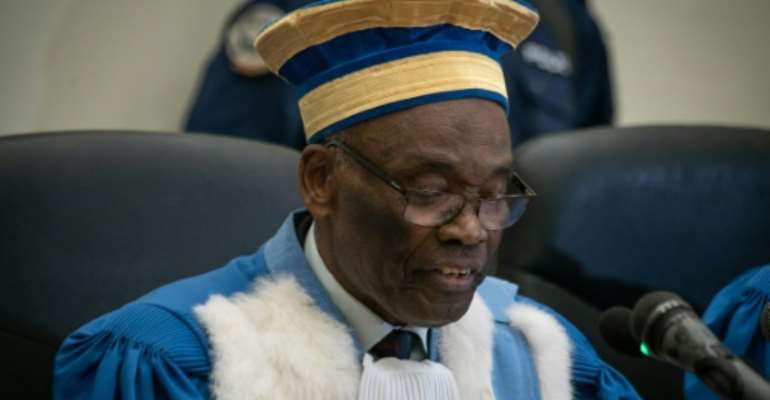 Benoit Lwamba's mandate was set to expire in April 2021. By Caroline THIRION (AFP/File)

The head of DR Congo's constitutional court, who is under US sanctions, has resigned, the presidency said on Wednesday.

Benoit Lwamba's departure comes as a government rift deepens over controversial judicial reforms which include proposals to define the powers of judges.

Critics say it is a ploy to muzzle the judiciary in a country notorious for its instability.

Supporters of President Felix Tshisekedi's party, the UDPS, and pro-democracy movements have held protests against the reforms, which were put forward by allies of his predecessor Joseph Kabila.

Kabila still wields huge behind-the-scenes influence more than 18 months after standing down from the presidency.

Lwamba had been appointed first president of the court in April 2015 by Kabila. His mandate was set to expire in April 2021.

Lwamba resigned at the beginning of July for personal reasons, the president's press office said.

Tshisekedi "congratulated and thanked (him) for services rendered to the justice system of our country", it said.

The United States imposed sanctions on Lwamba for alleged corruption and obstruction of democracy during the 2018 election which brought Tshisekedi to power.

The court notably threw out a challenge to that outcome which was filed by the runner-up, Martin Fayulu, who claimed the result was rigged.

Tshisekedi took office in January last year in the first peaceful transfer of power in sub-Saharan Africa's largest country after 18 years with Kabila at the helm.

While the handover eased fears that the country would plunge again into civil strife, Tshisekedi has faced a bumpy ride and the fragile coalition government with Kabila's allies remains a source of tensions.

The country has also faced violent protests over a decision by the National Assembly -- dominated by supporters of Kabila -- to appoint a new election chief who pro-democracy campaigners say has played a historic role in rigging elections in favour of Kabila.

In DR Congo, the president of the constitutional court is also president of a body responsible for "managing the careers of magistrates" over which he also exercises "disciplinary power".

The court also examines "appeals for interpretation of the constitution and decides on conflicts of jurisdiction between the legislative and executive powers".

It is the constitutional court which can judge and condemn the country's president and prime minister. It also has jurisdiction to settle presidential and national legislative disputes through its judgments.

‘Sputnik-V procurement contract must be re-examined’ – Kwaku...
31 minutes ago

Getting Sputnik-V vaccines from black market using middlemen...
31 minutes ago