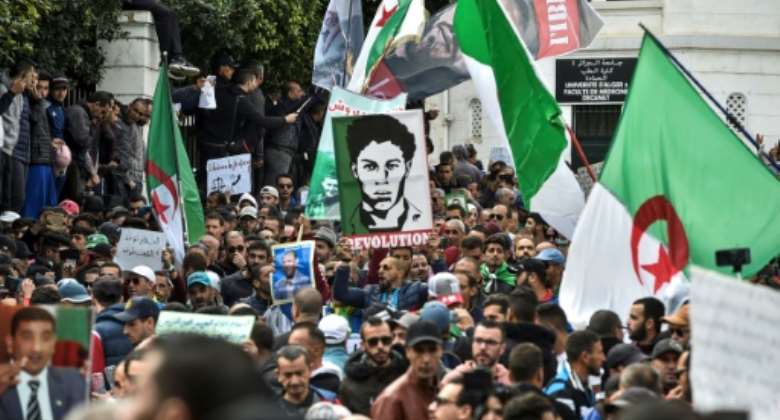 Mass protests by Algerians angry at corruption and cronyism led to the resignation of president Abdelaziz Bouteflika last year. By RYAD KRAMDI (AFP/File)

In the country's fourth major post-Bouteflika era corruption trial, Mahieddine Tahkout was convicted over "privileges, advantages and (access to) public markets" in violation of Algerian laws.

Tahkout, who also served as a minister, held a number of industry concessions and ran an assembly plant of the giant South Korean manufacturer Hyundai.

A court in the capital's Sidi Mhamed district also found him guilty of money laundering, along with his two brothers and a son, each handed seven-year jail terms.

Ouyahia and Sellal, not in court for the sentencing, were in hospital for unspecified medical reasons.

Tahkout, who has been in detention since June 2019, was a small trader who made a fortune by building a bus company and winning concessions in towns and universities.

Ailing Bouteflika, who was Algeria's longest-serving president, was forced to resign in April last year after losing the backing of the army amid enormous street protests against his decision to seek a fifth term.

Following his departure, authorities launched a string of graft investigations which have seen his powerful brother Said and two former intelligence chiefs jailed.

While some have welcomed the trials of figures in his entourage, many fear they amount to little more than a power struggle between regime "clans".