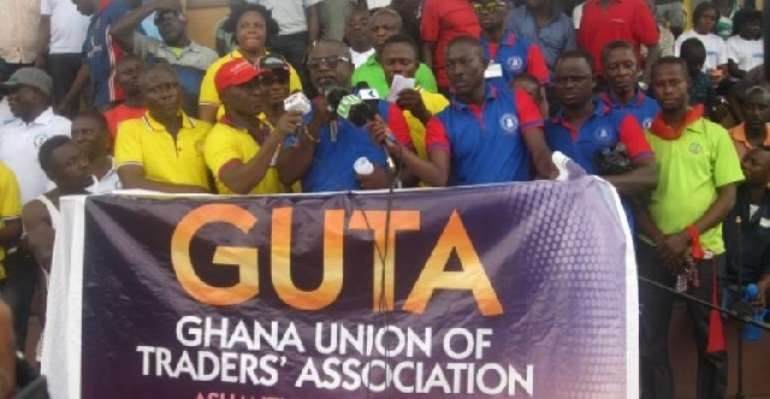 Some members of the dissolved Greater Accra Ghana Union of Traders' Associations (GUTA) Executives have distanced themselves from the press release issued on July 10 by three of their members who sought to resist their dissolution by the national executives.

Mr Kwadwo Amoateng, Nana Poku and Mrs Irene Victoria Odoom issued a press statement saying they do not answer to the national executives of the association and, therefore, GUTA national cannot dissolve their group.

Greater Accra GUTA executives noted that it runs full-time secretariat for its members.

The statement stated that the structure of GUTA is not like a political party that has regional and district branches under one umbrella.

But the rest of the executives say they find the statement “disturbing.”

1. National GUTA appointed and assign us the responsibility to steer the affairs of the Greater Accra Regional branch of GUTA, so we believe the national body has the capacity and power to dissolve any Regional branch executive, which Accra is no exception.

2. We were fourteen members appointed executive mandated to take collective decisions but it got to a point, only the trio took decisions and run the region as their personal property.

3. It was National GUTA which granted us permission to register the regional branch at the Registrar General's department.

4. In fact, the above-mentioned trio has exhibited a lot of unethical tendencies.

a. For instance, at which meeting was Mrs. Irene Victoria Odoom (Deputy Welfare Officer) appointed to be a signatory to our account?

b. Who are those behind the organization called Traders Advocacy Group of Ghana (TAGG)? Very alien to GUTA.

5. We wish to state unequivocally that we owe allegiance to the National body because it can appoint and can equally fire in the event of any insubordination by any branch of the Union; and