Millions worldwide back in virus confinement, but hope on US vaccine 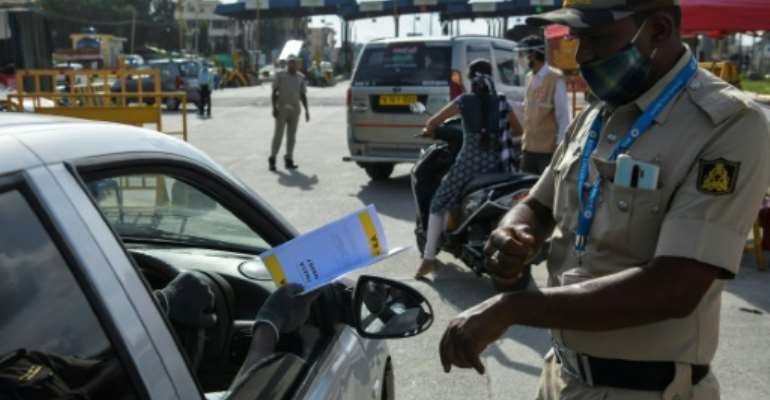 Millions of people went into new lockdowns Tuesday as novel coronavirus cases surged, but in one sign of hope, a US firm said it would soon start final-stage human trials for a possible COVID-19 vaccine.

Massachusetts-based Moderna will begin the trials later this month after promising early results.

With countries and cities across the globe reimposing restrictions in the face of new outbreaks of the disease, infections in India have continued to soar.

The country of 1.3 billion people had been easing its lockdown to lessen the economic impact -- particularly on vast numbers of poor Indians who lost their jobs.

Almost 24,000 Indian deaths have now been recorded, according to health ministry figures that many experts say underplay the severity of the situation.

Bangalore, home to more than 13 million people, has emerged as a new global hotspot.

Firms in the city's lifeblood IT sector handling the back-office operations of dozens of global corporations can continue operating, but with only half the staff allowed on premises.

The Commonwealth Games Village sports complex in New Delhi has been temporarily converted into a COVID-19 coronavirus care centre. By Money SHARMA (AFP)

Transport is banned except for emergencies, and only shops selling essential items are allowed to open.

"I do not want to take chances... I am stocking up for two weeks," said Mangala, a housewife, as she joined a long queue to buy provisions.

In the United States, the announcement of possible progress towards a vaccine came as results were published from the first stage of Moderna's vaccine trial, which showed the first 45 participants all developed antibodies to the virus.

Moderna is considered to be in a leading position in the race to find a vaccine against the coronavirus, which has infected more than 13.2 million people and killed 570,000.

The last-stage trials are scheduled to run through October 2022, with researchers expecting preliminary results well before then.

No return to 'normal'

But "there will be no return to the 'old normal' for the foreseeable future," World Health Organization chief Tedros Adhanom Ghebreyesus said Monday, warning that without governments adopting a comprehensive strategy, the situation would get "worse and worse and worse."

French President Emmanuel Macron, who oversaw drastically downsized Bastille Day celebrations due to the coronavirus, said he would like to make masks mandatory in enclosed public spaces. By Ludovic Marin (POOL/AFP)

In England, face masks will become compulsory in shops and supermarkets from next week, the health secretary said Tuesday in a U-turn on previous policy.

Face masks have been mandatory on public transport across the country since June 15, and Scotland has already made the coverings compulsory for shoppers.

"We have indications that (the outbreak) is accelerating a bit," he said.

California has ordered cinemas to close again as the state reimposes restrictions to combat the spread of the coronavirus. By Frederic J. BROWN (AFP/File)

Macron's comments come as doctors have warned of a potential second wave of infections, which could again overwhelm hospitals and require new lockdowns that could further hammer the economy.

But Disneyland Paris will begin a "phased reopening" on Wednesday, with visitor numbers limited via a new online reservation system to ensure social distancing.

In the United States on Tuesday, the hard-hit state of Florida posted a record number of deaths for a 24-hour period at 132.

Nationwide, more than 63,262 new infections and 850 deaths were recorded in the last 24 hours.

California has drastically rolled back its reopening plans and ordered all indoor restaurants, bars and cinemas to close again as cases soared across America's richest and most populous state.

Churches -- as well as gyms, shopping malls, hair salons and non-essential offices -- must also shut indoor operations in half of the Golden State's worst-hit and most densely populated counties, including Los Angeles.

The bruising economic impact of the pandemic was stark in Singapore, where the economy shrank more than 40 percent in the second quarter, plunging the Southeast Asian financial and trading hub into recession for the first time in a decade.

Singapore's economy shrank 40 percent in the second quarter with the results likely to ring alarm bells for other trade dependent countries. By Roslan RAHMAN (AFP)

The worse-than-expected figures will ring alarm bells for other economies reliant on trade.

Britain also saw its economy shrink by nearly a fifth in the three months to May compared with the previous quarter as the lockdown crippled activity.

World toll of coronavirus infections and deaths, as of July 14 at 1900 GMT. By (AFP)

Since the start of July, nearly 2.5 million new infections have been registered across the globe, with the number of cases doubling over the past six weeks, according to an AFP tally based on official figures.

Latin America on Monday recorded the world's second-highest regional death toll, declaring a total of 144,758 fatalities to pass the 144,023 recorded in the United States and Canada.

It now stands second only to Europe.

South Africa has reimposed a nationwide curfew to prevent a "coronavirus storm" from ravaging the continent's hardest-hit nation, where new infections have topped 12,000 a day.