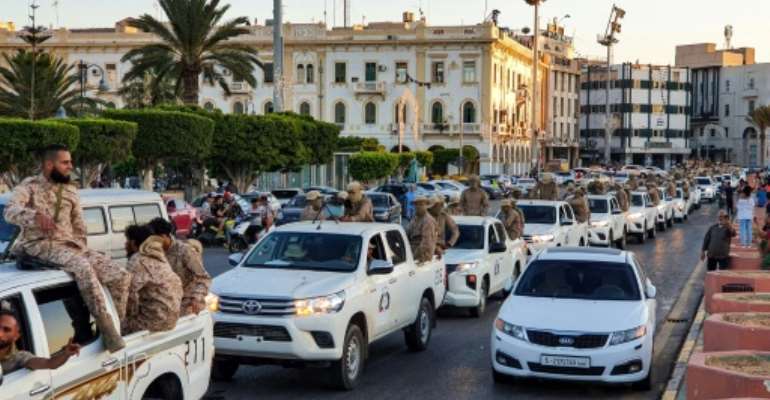 Convoy of the "Tripoli Brigade", a militia loyal to the UN-recognised Government of National Accord (GNA), parade through Martyrs' Square at the centre of the GNA-held Libyan capital Tripoli. By Mahmud TURKIA (AFP)

A war of words was heating up Tuesday in oil-rich and conflict-torn Libya, where two rival administrations are battling for control and tensions have risen between outside forces Egypt and Turkey.

The Libyan parliament aligned with strongman Khalifa Haftar issued a statement late Monday giving in-principle support to a threatened Egyptian military intervention against what it termed a "Turkish occupation".

Libya has been torn by violence since the 2011 ouster of long-time dictator Moamer Kadhafi in a NATO-backed uprising, and the conflict has since drawn in multiple foreign powers.

The Turkish-backed and UN-recognised Government of National Accord (GNA) based in Tripoli in the west has been fighting Haftar's forces, which are supported by Egypt, the United Arab Emirates, Russia and others.

The GNA, with stepped-up Turkish support, in June repelled a 14-month siege of the capital by Haftar and launched a counter-offensive that is now stalled outside the coastal city of Sirte, Kadhafi's hometown.

People wave flags of Libya (R) and Turkey (L) during a demonstration in Tripoli. By Mahmud TURKIA (AFP)

He threatened to send in his army if GNA forces capture Sirte, which is located more than 800 kilometres (500 miles) from the Egyptian border and now held by Haftar's troops backed by a local Salafist militia.

The pro-Haftar parliament said Monday on its website that it would back an Egyptian intervention if necessary "to protect the national security of Libya and Egypt if they see an imminent danger to both our countries".

Libya and Egypt should work together, the assembly said, "to guarantee the occupier's defeat and preserve our shared national security" in the face of "the dangers posed by the Turkish occupation".

Sisi's warning was perceived as a "declaration of war" by the GNA but received the full support of the UAE, Saudi Arabia, Bahrain and Jordan, all members of the pro-Haftar axis.

GNA spokesman Mohamad Gnounou pledged Tuesday that their forces would advance toward the "cities taken hostage" and "eradicate all outlaw groups", an allusion to the pro-Haftar forces.

Egypt's military said Saturday it had carried out exercises involving navy, airforce and special forces near the Libyan border in response to the "severe and rapid changes" in the region.

The UAE on Tuesday issued an implicit warning to GNA forces advancing on Sirte.

"The drums of the war raging around Sirte in Libya threaten serious developments and dangerous humanitarian and political consequences," tweeted its minister of state for foreign affairs, Anwar Gargash.

"We in the UAE call for an immediate ceasefire and for wisdom to prevail," he added, calling for inter-Libyan dialogue "within clear international frameworks".

Years of international efforts have so far failed to bring a lasting peace to the North African country which has the continent's largest proven oil reserves.

Sisi in June called Sirte a "red line" for Egypt, while Ankara has urged Haftar to withdraw from the strategic city and negotiate a ceasefire.

Relations between Cairo and Ankara have been deteriorating since 2013, when Sisi led the army's ouster of Islamist president Mohamed Morsi, a Muslim Brotherhood figure close to Turkey.

Libya expert Jalel Harchaoui of the Clingendael Institute in The Hague said Tuesday that, despite the rhetoric, he did not see the imminent risk of major military escalation.

"The military reality around Sirte has not changed significantly in the past two weeks," he said.

Sirte remained well-defended by pro-Haftar Russian and Syrian mercenaries with UAE logistical support as well by dangerous minefields to the west of the city.

At a time of regional economic and pandemic woes, he said, "Egypt has other problems at the moment".