Libya small businesses struggle to rebuild after waves of unrest 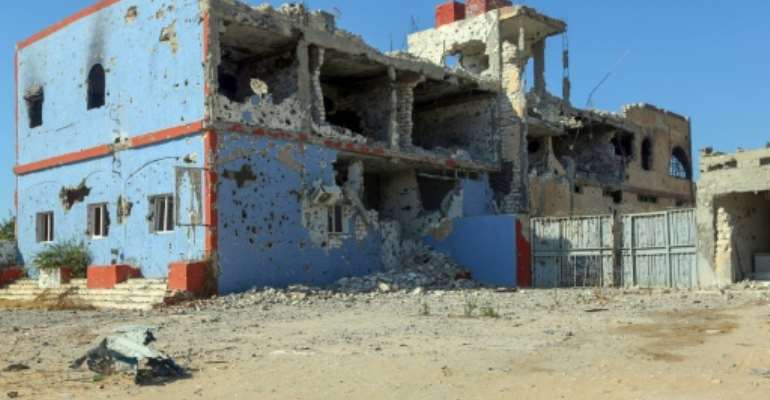 Small businesses have taken a heavy blow in Libya after the country plunged into chaos and violence following the 2011 NATO-backed uprising that toppled and killed veteran dictator Moamer Kadhafi. By Mahmud TURKIA (AFP)

Libyan businessman Mahmud al-Sharkassi surveyed the ruins of his factory on the outskirts of war-scarred capital Tripoli, disheartened but determined to get back to work.

"This used to be the heart of my project. Everything started here," he said, looking over destroyed buildings where he used to store kitchen fittings before they were distributed to showrooms.

The Ain Zara district on the southern edges of Tripoli, where the factory lies, became a battleground in April last year as the forces of eastern-based strongman Khalifa Haftar tried to seize the capital from the UN-recognised administration.

His rivals launched a searing fightback and repelled his forces earlier this year. But the violence had devastated industrial zones and residential suburbs in Tripoli's hinterland.

The battle was the latest blow to small businesses in Libya, which plunged into violence after the 2011 NATO-backed uprising that toppled and killed veteran dictator Moamer Kadhafi.

After Kadhafi took power in a 1969 coup he had practically scrapped the private sector, sweeping away schools, factories, businesses, libraries and hotels and replacing them with state-run enterprises.

That saddled the oil-dependent country with a bloated public sector -- two million civil servants out of a population of 6.6 million, their salaries representing 59 percent of the state's budget, according to the central bank.

Kadhafi's fall triggered the emergence of young and vibrant entrepreneurs, who have carried on despite the mammoth challenges facing the North African country.

Sharkassi believes small and medium enterprises (SMES) can be a vector for development -- providing the state commits to diversifying the economy away from oil income and encouraging private enterprise.

"There are opportunities," he said.

"The mindset of young people has changed. Now many realise that the future is in the private sector, not in the public sector anymore," she told AFP.

Small business are struggling to make a difference in Libya and entrepreneurs say the government must help by fighting corruption, introducing structural reforms and restoring stability. By Mahmud TURKIA (AFP)

But the challenges are complex.

"A lot needs to be done," said Gaddah. There are "too many obstacles that have made most of Libya's SMEs too fragile and sometimes not even sustainable, (including) access to finance."

Even the process of registering a company is "long, painful and expensive", she said.

Marwan Boueshi, an ironworker whose workshop was partly destroyed in the battle for Tripoli, urged the government to introduce structural reforms, restore stability and show it is capable of fighting graft.

"If you're not corrupt, you're seen as not clever enough to do business."

Five years ago, deadly battles between rival militias prompted Walid Fathi to close his Tripoli-based printing and advertising company and leave the country.

"From one war to the next our company did not survive," the 45-year-old told AFP.

His family set up the company in 2006 and it was successful, he said, but not worth risking their security and that of a dozen employees.

"The situation became unbearable until finally in March 2015 we had to shut down, sell the machines, fire staff and leave Libya for our own security," he told AFP during a visit back home.

Their storage facility was repeatedly raided and some $170,000-worth of printers, paper and ink imported from Germany stolen.

Meanwhile, some clients still haven't paid bills dating back to 2012.

Yet 45-year-old Fathi, like Boueshi, wants to start working again.

"The whole purpose of our family's business was to create something in the country, for the country," said Fathi.

"I want to come back even if I am forced to work without a decent margin of profit. I need to be here."

Now he is canvassing the Tripoli business community, handing out business cards to prospective clients and hoping for a new beginning.

Sharkassi, standing amid broken glass on his showroom floor, also voiced optimism in spite of the challenges.

"Despite the destruction, we'll get back to work quickly," he said.

Collins Dauda charged with causing financial loss to the sta...
31 minutes ago