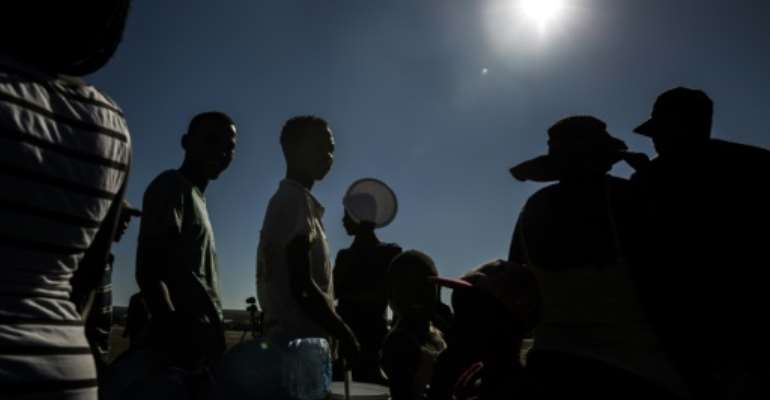 Only two heatwaves in sub-Saharan Africa have been listed over the last 120 years in the Emergency Events Database (EM-DAT), compared to 83 in Europe since 1980. By Guillem Sartorio (AFP/File)

While detailed records of hot spells and their aftermath exist for the world's wealthier regions, in Africa scientists and governments are mostly flying blind in assessing the damage to human health and economies, the researchers reported in the journal Nature Climate Change.

"But the consequences of these heatwaves are not being recorded," he told AFP. "It is as if they haven't happened, but we know they have."

Only two heatwaves in sub-Saharan Africa have been listed over the last 120 years in the Emergency Events Database (EM-DAT), the most complete registry of extreme weather event impacts in the world.

"There is an urgent need to address this discrepancy," said Harrington.

There is also an absence of data for other types of extreme weather in Africa, such as drought, heavy rains and major storms.

Global warming is expected to increase the number of "deadly heat days" -- beyond the threshold of human tolerance -- in coming decades, especially in the tropics, earlier research has shown.

But gathering data on the location, duration and intensity of heatwaves is only part of what is needed to plan ahead, the researchers said.

"The problem is not the absence of weather data per se," senior author Friederike Otto, director of the Environmental Change Institute, told AFP.

"It is the lack of impact data, such as records from hospitals on mortality, or power and infrastructure impacts."

How monthly temperatures compare with the 20th-century average for that month. Starts with Jan 1880, ends with July 2019. By Simon MALFATTO (AFP/File)

Climate models show that sub-Saharan Africa is going to be disproportionately affected by worsening heatwaves due to climate change, and the current lack of data hampers the region's ability to prepare, she said.

"Is five days above 40 degree Celsius (104 degree Fahrenheit) the threshold for serious impacts on mortality? Does one extremely hot day lead to infrastructure failure?," Otto asked.

"Without assessing impact data and weather data together, you don't know how an early warning system should be designed."

In Europe -- where extreme hot spells rarely last more than a couple of weeks -- emergency response measures are usually triggered after three days.

A rare "heat dome" settling this week over much of the United States is on track to produce scorching temperatures for weeks.

In tropical and sub-tropical Africa, heatwaves can last longer. One in 1992 went on for four months, compounding a record drought.

It was never recorded in the EM-DAT registry.

"People in Africa are certainly aware of the growing number of heatwaves on the continent," said Mohamed Adow, director of Power Shift Africa and former climate lead for Christian Aid, where he saw firsthand the impact of extreme weather on the continent.

"But if they are not being recorded by scientists, it will be much harder for African voices to be heard in the climate debate," said Adow, who was not involved in the new research.