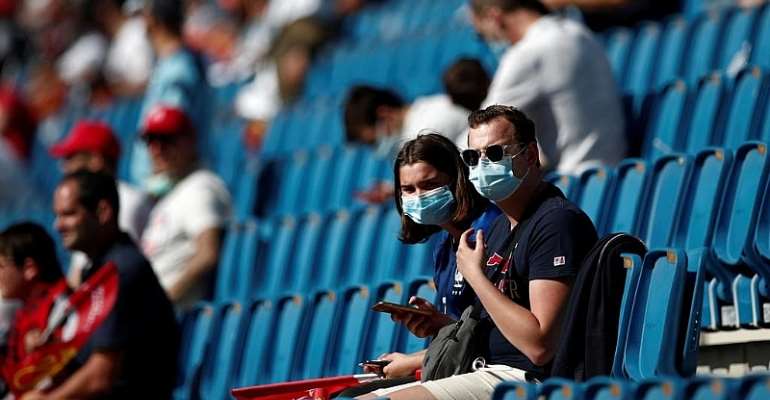 France's government said Sunday it was studying whether to impose mandatory masks in indoor spaces as doctors and health officials warned of worrying rates of new infections.

“The use of wearing a mask in enclosed spaces is being studied,” French Prime Minister Jean Castex said during a visit to the heavily affected overseas territory of Guiana on Sunday.

The remarks were the closest sign yet that French officials are preparing to act upon an increasing number of warnings that people are becoming too nonchalant with recommendations around the spread of Covid-19.

A group of 14 doctors called for reinforced mask-wearing and physical distancing on Saturday, and public officials including President Emmanuel Macron have been urging the public to take protective measures.

“You know them, they save lives: protective gestures are not an option,” Macron tweeted on Sunday. “Protect yourselves and those close to you from the virus.”

Concerns of complacency
However, masks have become increasingly optional since the end of coronavirus lockdown on 11 May.

Many shops that required customers wear masks in the weeks following the end of nationwide confinement in May now only recommend them.

Wearing a mask is still required on public transport and when visiting care homes for the elderly, and teachers and hospitality industry staff have to wear masks, but they are optional virtually everywhere else.

A gathering of more than 5,000 people at a festival on the Promenade des Anglais in the city of Nice underlined concerns of public complacency.

Health officials warn of worrying trends
There have been several warnings over the past week of a slight but worrying uptick in the parameters of France's coronavirus epidemic.

There was a “new trend of increasing circulation of the SARS-CoV-2 virus, but viral circulation remains at a low level” in mainland France, noted the most recent epidemiological report of public health agency Santé publique France (SPF) on Friday.

A separate notice indicated the effective reproduction number (Re), a crucial figure for measuring the risk of the spread of the virus, for France has climbed above 1, the threshold for epidemic rates of infection.

“We're at the mercy of a resurgence in France,” warned Jean-François Defraissy, head of the scientific council advising the government on the epidemic, in newspaper Le Monde.

“We know now that all it takes is one supercontaminator in a public gathering, and it will be off again like in Mulhouse,” Defraissy said in reference to an evangelical gathering in February thought to be at the root of the epidemic in the east of the country.

SOS-Médicins France, a housecall service employing 1,300 doctors, told Le Monde consultations for suspected cases of Covid-19, while far below numbers seen in April, had increased 41 percent between 29 June and 5 July.

Lockdowns imposed around Europe
France passed the symbolic figure of 30,000 deaths due to Covid-19 in hospitals in care homes in the most recent report of epidemic figures on Friday.

That figure was reached slowly, since the mortality rate and numbers of patients in hospital and in intensive care relative to the new coronavirus have been on the decline since the peak of the epidemic in April.

But SPF has also recorded 333 clusters of infection nationwide since 9 May, of which the most recent and largest is a cluster of 200 confirmed cases in the department of Mayenne.

Similar resurgences in infections have let to partial lockdowns elsewhere in Europe.

Germany ordered a week-long lockdown affecting 600,000 people in Rhine-North Westphalia in late June, the British city of Leicester has also been in lockdown since 29 June, and 700,000 people around Lisbon in Portugal were ordered to stay home for at least two weeks at the start of July.

On Sunday, Spanish authorities imposed a new lockdown affecting 200,000 people around the city of Lerida in Catalonia, but a court overturned the order on Monday.

Chinese man crushed to death at Suhum
13 seconds ago