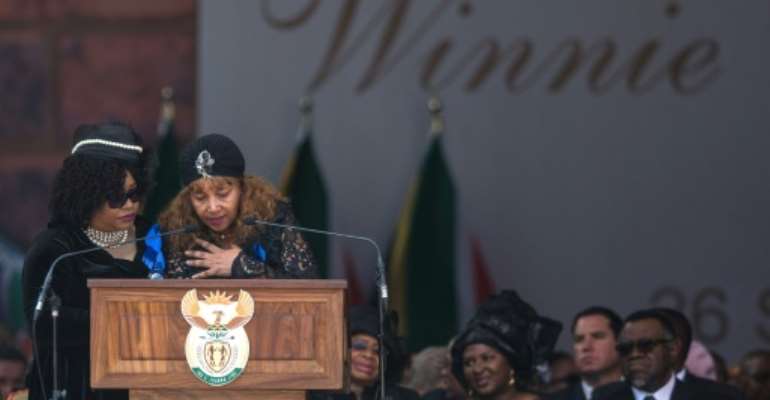 Zindzi Mandela, left, and her sister Zenani Mandela-Dlamini, at the funeral of their mother, Winnie Madikizela-Mandela in April 2018. By Wikus DE WET (AFP)

Zindzi Mandela, the youngest daughter of South Africa's first black president and anti-apartheid icon Nelson Mandela died on Monday at the aged of 59, her family and President Cyril Ramaphosa announced.

Daughter to Mandela and Winnie Madikizela-Mandela, she was South Africa's ambassador to Denmark at the time of her death, which coincided with the anniversary of a car crash that claimed the life of his first son, 51 years earlier.

"Ambassador Mandela passed away in the early hours of today, 13 July 2020, in a Johannesburg hospital," Ramaphosa said in a statement.

The cause of her death was not immediately revealed.

She had been designated to become South Africa's envoy to Liberia after her stint in Copenhagen, which started in 2015.

The Mandela family released a brief statement announcing her death, which said she was survived by her children and grandchildren.

Zindzi was born and raised in Soweto and grew up while her father was incarcerated by the apartheid regime for 27 years.

Like her parents, she was involved in the liberation struggle and was an active member of the African National Congress (ANC) youth movement. 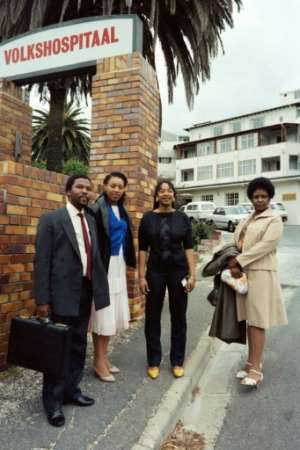 File picture from November 1985 at the height of the apartheid era: Winnie Madikizela-Mandela with her daughters Zenani, centre, and Zindzi, left, visiting Nelson Mandela after he underwent surgery in a Cape Town hospital. By Gideon Mendel (AFP)

One of her most prominent moments was in 1985 when she read out -- in front of a huge crowd of ANC supporters at a Soweto stadium -- a letter in which her father rejected an offer of release from the then apartheid president, P.W. Botha.

At the time Botha had offered to free Mandela from prison on condition he renounced the anti-apartheid violence and protests.

That letter, which she read dressed in yellow and black -- the trademark colours her father had adopted as a statesman -- "reinvigorated the values and principles of the struggle", according to another anti-apartheid icon, retired archbishop Desmond Tutu.

"For the 27 years that Nelson Mandela was imprisoned, his family -- wife... and daughters Zindzi and Zenani -- played a critical role symbolising the humanity and steadfastness of the anti-apartheid struggle," the Tutu Foundation said in a statement.

Her fiery anti-apartheid stance did not wane with age.

In June last year, Zindzi set off a storm when she tweeted "Dear Apartheid Apologists, your time is over. You will not rule again. We do not fear you. Finally #TheLandIsOurs".

In another she addressed to some of her Twitter critics as "trembling white cowards" and "thieving rapist descendants' of Jan van Riebeeck, referring to the Dutch colonial administrator who led first white settlers that landed in South Africa in 1652.

Paying tribute to Zindzi's "unshakeable resolve of our fight for freedom", Ramaphosa referred to her as "a fearless political activist who was a leader in her own right".

"Our sadness is compounded by this loss being visited upon us just days before the world marks the birthday of the great Nelson Mandela," said Ramaphosa.

Zenani, 61, is South Africa's ambassador to Argentina while Makaziwe, 66, is a businesswoman in South Africa.

His eldest child Thembekile was killed at the age of 24 in a car crash on this day -- July 13, 1969 -- while his father was imprisoned on Robben Island.

His other son, Makgatho Mandela, died of an AIDS-related illness in 2005 at the age of 54.

Both Thembekile and Makgatho were born from Mandela's first marriage, to Evelyn Mase, as was Makaziwe.

Mandela spoke openly about the cause of Makgatho's death, becoming one of the first public figures to break the taboo around the AIDS epidemic that had engulfed South Africa.