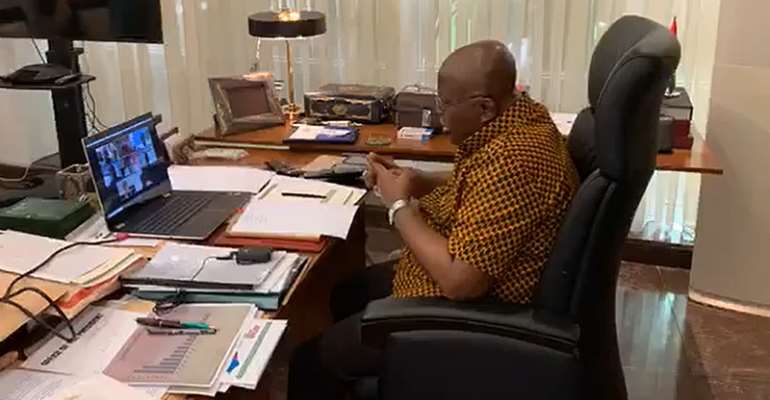 At a virtual meeting with the Communications Advisory Team of the ruling NPP on Zoom, President, Nana Addo Dankwa Akufo-Addo has reiterated the need for NPP communicators to stress on COVID-19 compliance as part of efforts in fighting the virus

The level of success against the virus according to the President will be determined by strict observance of the measures by Ghanaians.

“I think there is a need to continue stressing on the need for respecting the COVID protocols. We are in government and it is very important that that aspect of our concern about the need for our people to be safe comes out positively in everything we say. People have to take the protocols seriously.”

He also called on the communicators to remind Ghanaians of the state of the country when they inherited power in January 2017.

“We need to set before the Ghanaian people clearly the situation we inherited on the 7th of January 2017. It is critical because, without that reference, it is difficult to measure the quality of the achievement. You have the records; dumsor, high rate of inflation, low rates of growth, widespread unemployment, a certain level of demoralization in the country and within three years, this very bleak economic narrative has been transformed.”

There have been concerns about the health of the President after he revealed that he had been advised to go into self-isolation after exposure to someone with COVID-19.

A statement dated July 4, 2020, and signed by the Minister of Information, Kojo Oppong Nkrumah, said President Addo Dankwa Akufo-Addo had decided to go on the 14-day self-isolation despite testing negative for the virus.