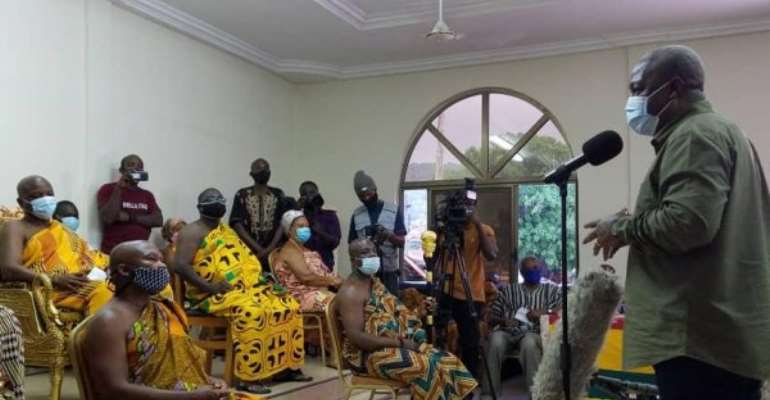 Former President John Dramani Mahama, who is currently on a tour of some voter registration centres in the Volta Region, has called for calm among supporters and members of the NDC even when they are provoked by the NPP.

He also urged them to go out in their numbers and register their names in the new voter roll for the 2020 December 7th elections.

He said there have been complaints from inhabitants of intimidation from the military disposition in the region in the communities he's visited and urged the people not to ''be angered by the situation and come out in large droves to register to vote.''

Mr Mahama said these when he paid a courtesy call on Togbe Afede to conclude his tour of parts of the Volta region in Ho.

He said civic rights are fundamental to all and no military deployment can curtail it.

Mr Mahama believed there could be other reasons for the military deployment than the COVID-19 pandemic excuse.

He said if from two cases there was no deployment, why the need to deploy now when COVID-19 cases have risen to beyond 20,000 saying “our neighbouring countries must rather be afraid of us because of our numbers.''

Mr Mahama draws linkages between the military deployment and the compilation of the new voter register.

The flagbearer congratulated Togbe Afede and the National House of Chiefs for not shirking their responsibilities but always spoke to the moral conscience of the nation on topical issues and reprimand errant people irrespective of political representation.

“In the heat of the moment reprimand us and call us to order when we err”.

Mr Mahama promised to epitomise peace and unity and expressed the hope that Ghanaians will reward him on his second coming.

Togbe Afede said the role of Chieftaincy as an institution cannot be overemphasised.

”Let's foster peace and unity for all under the directive principle of state policy,'' and urged Ghanaians to thrive to register under the dispensation to vote.

The Agbogbomefia said “Never have we seen military invasion like this in peacetime describing the deployment as divisive.''

He said the country's problems are already huge and cannot be compounded by intimidation stating Africa needed peace to develop its accumulated resources that contribute about 20 per cent to global mineral deposits, a population that constitutes 17 per cent of the global population with a share of gross domestic product (GDP) and world trade constituting three and two per cent, respectively.

“We need peace and unity to develop, the fallouts from the COVID-19 pandemic is already colossal to deal with.”