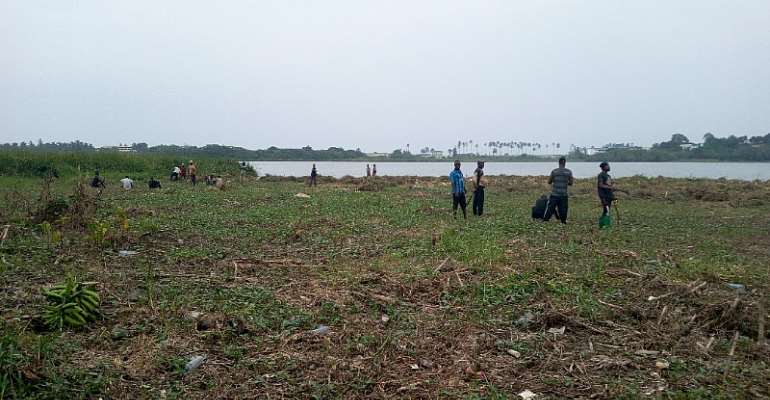 The Chairperson of the Association of Concerned Cape Coast Citizens and Residents (ACCCCAR) has bemoaned the situation where most journalist focus on more on negative reportage and political issues at the expense of developmental stories.

He expressed worry that "this exercise where they are spearheading the clearing of bushes along the Fosu Lagoon and its subsequent dredging hasn't received the much needed media attention that it deserves".

"I think the media should not concentrate too much on political issues but should also have some time and space for development orientated stories like the the redevelopment for the Cape Coast Fosu Lagoon," he bemoaned.

He made these remarks when he took the media round the Lagoon today Sunday, 12th July, 2020, to see for themselves the work being done so far. "We have contracted these men to weed around the lake, pending dredging" he added.

He further explained that, these weeds being cleared today around the Lagoon has been there for several years. "No one seems to care but the time has come for something to be done and that is what we are witnessing today".

He further explained that, the whole project is expected to last for three months. Thus, July, August and September.

Reacting to the fact that similar things have been done in the past, so what is new about this particular one, the chair of ACCCCAR, Prophet Quarm said, this would see the light of day. He added that "It is a collaborative effort between the Cape Coast Metropolitan Assembly, the Oguaa Traditional Council and ACCCCAR.

He averred that no single individual can finance the project. "It would take a collaborative and concerted effort of all Cap Coast inhabitants to let the project come to fruition".

Responding to why they are motivated to be involved, the ACCCCAR Chair explained that, what they are embarking upon would halt the siltation of the Lagoon and restore it to its original status and as a Lagoon worthy of its name and attraction. "A lot of livelihoods are dependent on the Lagoon and so when it is restored to its original status then, such persons livelihoods would be assured and also consumers of fish from the Lagoon can be assured of consuming wholesome fish".

Responding to how they intend to tackle the open defecation menace around the Lagoon, Prophet Quarm said "Once the project is completed, we would solved that problem through the enforcement of the law" and he took the opportunity to caution the inhabitants who live around the Lagoon to desist from that practise.

He finally thanked the media for coming and urged them to be partners in development. "We should not doubting Thomas's and be rest assured that everything is possible through Christ who strengthens us" he concluded.

Government to reclaim mined-out areas in Ghana
51 minutes ago