Policeman In Trouble After Slapping A Woman At Voter Registration Centre 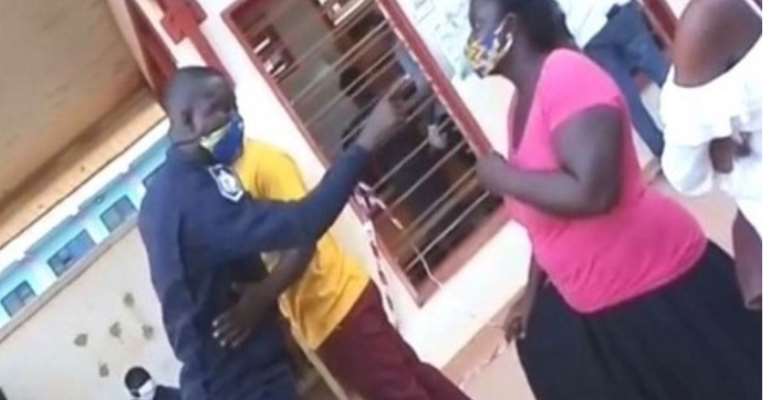 A Policeman captured in a viral video on social media slapping a woman at a voter registration centre at the ongoing exercise has landed himself into trouble.

This follows the launch of investigations into the incident by the police administration who have vowed to get to the bottom of the issue.

The video shows a woman who was in a queue at an unknown centre being slapped by a police officer after a banter.

They were later separated by other registrants at the centre.

“The attention of the Police Administration has been drawn to a video circulating on social media in which a police officer is seen slapping a woman at a place believed to be a Voters Registration Centre.

“The Police Administration wishes to assure the public that it has commenced an investigation into the matter and will provide facts of the matter to the public in due time, all should be assured,” the statement said.

There have been pockets of the violence at some centres since the EC began its registration exercise.

Two men who were recently engaged in a fight with machetes at the E.P church registration centre at New Town in Accra have been re-arrested after being freed by some sympathizers

DSP Afia Tenge said all arrested persons have been arraigned.

“On 7th of July, two persons were arrested at the EP registration centre in Accra Newton for engaging in a fight and wielding machetes.

“An action security detail on the ground suspect was likely to cause a breach of peace. On their way to the Police station for proper custody, some young men suspecting to be sympathizers of these suspects crossed the Police vehicle and impunity and forcibly the two persons. They have all been arrested and arraigned. ”