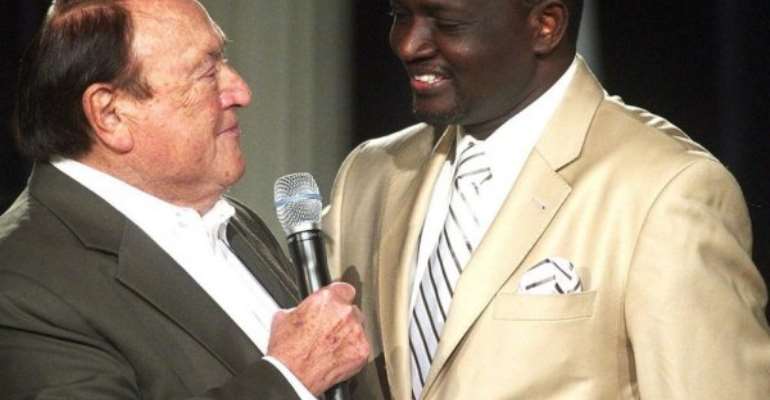 Evangelist Cerullo died yesterday Saturday 11th July 2020 at the age of 88 in the USA.

Other Christian leaders across the world have also paid glowing tribute to this dynamic man of God for his missionary.

The evangelist, whose missionary work brought him to Ghana for a number of crusades and teaching programmes, impacted leaders such as Evangelist Dr Lawrence Tetteh, President of the Worldwide Miracle Outreach, Archbishop Bishop Nicholas Duncan Williams, General Overseer of the Action Chapel International and Bishop Charles Agyin Asare, Presiding Bishop of the Perez Chapel International.

In his tribute, Dr Tetteh said: "The world has lost one of the generals in the faith who was a father to many modern preachers of this generation and a true man of God.

"Papa Morris Cerullo was a man of God who was fit in any pair of shoes that was given to him. He carried a unique anointing and an undeniable gift of healing that transformed many lives from all walks of life.

"I have followed him to many nations of the world and have been impacted greatly by his apostolic unction.

"We will miss him greatly but I believe heaven is rejoicing in his honour".

The well-travelled evangelist said Dr Cerrullo encouraged him to never lose his unique style of preaching with the stories, singing and dancing.

"I cannot say thank you enough for your love and support to my ministry, my wife Barbara and I.

"May your faith find a resting place in Him.

"Papa! Rest well in the bossom of the Lord."

Bishop Agyin Asare of the Perez Church, who hosted Dr Cerullo in 2017, wrote on his twitter page: "My father Dr Morris Cerullo is gone to join the great cloud of witnesses after having fought a good fight and having run his course. His legacy lives on in us."

From Uganda, the founder of the Miracle Centre Cathedral – Rubaga, Robert Kayanja, described the preacher as one who fought a good fight even in his old age.

The Presiding Bishop of The Redeemed Evangelical Mission, Nigeria, Bishop Mike Okonkwo also paid his tribute via a twitter post saying:"My father – Dr. Morris Cerullo! “Like a good soldier of Christ, you fought a good fight, finished your course and kept the faith (2 Tim 4:7).

Dr. Cerullo was a world-renowned evangelist and the President of Morris Cerullo World Evangelism, which was founded in 1961.

He travelled to many developing nations for over seven decades.

According to his official website, he ministered in 93 nations, in more than 400 cities, on seven continents, where he ministered to millions.

"He dedicated his life to helping the hurting and travelled more than 250,000 miles every year to minister healing and salvation to the world".

Dr. Cerullo, who was raised in a Jewish Orthodox orphanage in New Jersey, is said to have given his life to Christ when he was 14 and a half years old.

"By 15 years old he was preaching three to four times per week in local churches. At 17 years old, he received a scholarship and graduated from the New York Metropolitan Bible School in Suffern, New York".

He was ordained by the Assemblies of God as an evangelist minister in 1952.

He published about 80 inspirational and Christian Literature books and hosted the popular television programme, 'Victory Today', from 1991.

Bawumia calls for greater unity, cooperation between Muslims...
23 minutes ago