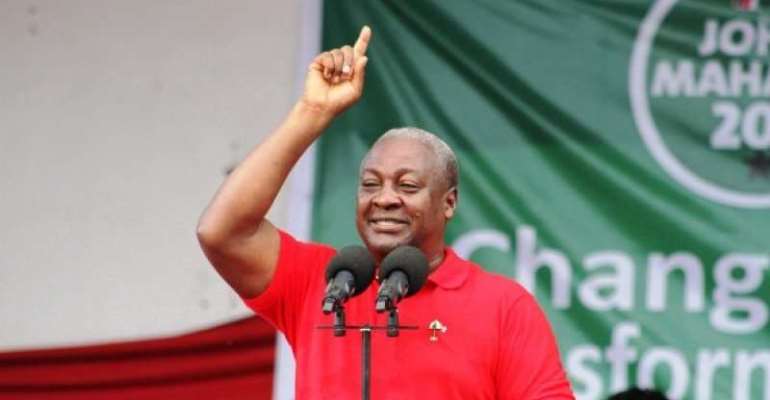 As part of efforts to familiarise himself with the situation on the grounds regarding the ongoing new voter registration, former President John Mahama has visited registration centres in some parts of the Volta region.

Mr Mahama was briefed by the regional executives of the NDC who have been monitoring the process.

Mr Mahama also interacted with some of the personnel of the EC in charge of the various processes as well as the party agents monitoring the process.

Meanwhile, Mr Mahama’s running mate, Prof Naana Jane Opoku-Agyemang, has expressed appreciation for the support that greeted the announcement of her new role.

The former Minister of Education, who also served as the first female Vice-Chancellor of a public university in Ghana, was, on Monday announced by the flag bearer of the National Democratic Congress ahead of this year’s presidential election.

That announcement has been greeted with enthusiasm and support from people from all walks of life, including academia, civil society as well as professional and women groups.

Social media has also been awash with support for Prof Opoku-Agyemang.

Addressing a retreat of the NDC Campaign Team on Friday in Accra, Prof Opoku-Agyemang said she was grateful for the support accorded her and promised to justify the confidence reposed in her.

Prof Opoku-Agyemang who said people, especially women, are looking up to the NDC for answers to issues that affect them, called on the NDC to close its ranks and work hard for victory in the upcoming elections.

It is with deep honour and a high sense of gratitude that I convey my acceptance of the nomination by H.E. John Dramani Mahama, Flagbearer and Leader of the great National Democratic Congress (NDC) to be his running mate for the December 7, 2020 election.

I am humbled by the overwhelming endorsement my nomination has received from the Founder of the NDC, H.E. Jerry John Rawlings, the Council of Elders, the National Executive Committee and the rank and file of our party, as well as the general public.

This historic nomination is not a personal achievement but victory for inclusive and participatory democracy, which enhances the credentials of our country and recognizes the towering role women have played over the ages to achieve the progress we have made.

I wish to salute all those who have come before me and pledge to draw deeply from their inspiration.

I have worked with HE John Dramani Mahama closely and I know he is a man of vision, a leader you can trust, a public servant of integrity and a courageous leader who makes the right decisions in the national interest at all times.

I pledge to diligently apply myself and dedicate all the energy and intellect I can muster to ensure a resounding victory for the NDC and for our country, Ghana. So help me God.