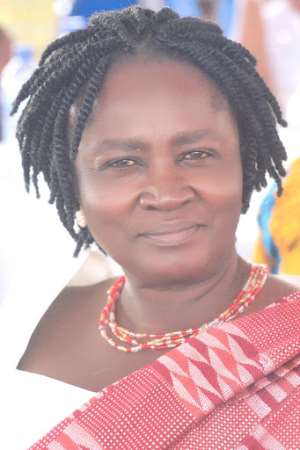 The leadership and entire membership of Educational Workers Connect, wish to congratulate Prof. Jane Naana Opoku-Agyemang on her nomination by HE Former President Mamaha as his running mate in the upcoming general elections come December, 7th.

The choice of the astute Professor comes to us as no surprise since she is more than qualified for such an esteemed position of the land.

Offering girls basic education is one sure way of giving them much greater power of enabling them to make genuine choices later in life.

Professor Jane Naana Opoku-Agyemang, as a woman with many facets buttresses once again the importance of girl child education.

Her nomination, Educational Workers Connect, considers as an endorsement of the contributions of teachers to national development due to the fact that;

Teachers are at the frontline of education and play a major part in shaping values, knowledge and skills of students.

They are the pillars of nation-building process because they help to influence the next generation to become moral, responsible, and productive members of our community.

They are the country's gatekeepers, opening doors to opportunities and possibilities that are beyond the foreseeable horizon.

They trigger visions, develop building blocks, and catalyze actions to build the world to come.

Having known her as a caring, hardworking mother and academician, we do not doubt her ability to live up to her new responsibilities.

She demonstrated a lot with her forward looking and progressive policies she implemented as the education minister.

It is our fervent prayer and hope that she would work assiduously and live up to all expectations.

We wish to assure her of our unflinching support as far as issues concerning education are concerned.

We also urge her to be fair, firm and live up above reproach and discharge your duties dispassionately.

It is our hope, she would do a lot in order to improve the education sector and also initiate a lot of empowerment programs for women.

May the good Lord grant her strength, wisdom and courage to succeed in her new capacity.

She should never forget the good Lord who has brought her this far!