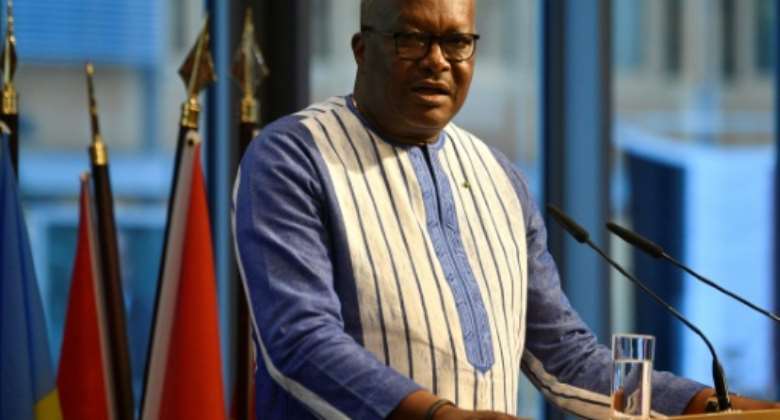 President Roch Marc Christian Kabore is the frontrunner in November's elections, despite his failures to end jihadist attacks. By John MACDOUGALL (POOL/AFP)

Simon Compaore, president of the People's Movement for Progress (MPP), made the announcement to cheering supporters at a stadium rally in the capital Ouagadougou.

The decision, which came after several hours of closed-door discussions among party delegates, came as little surprise, as he was his party's only candidate to run.

Kabore himself could not attend the event, because of his role, said a party executive.

But in a message read out by a party spokesman, he welcomed the decision and promised to build "solidarity and development" in the country.

Thousands turned out in a massive show of force, filling a 5,000-capacity sports stadium in Ouagadougou and 20 giant tents outside. Crowds wearing the party colours of white and orange had been bussed in from all over the country.

The prime minister, national assembly speaker and first lady also turned up at the stadium, ignoring the coronavirus pandemic, to voice support as the crowd inside the stadium shouted "MPP Victory!"

"It's a message to opposition political parties. They shouldn't think they can beat our champion," said Kader Tapsoba, a 46-year-old businessman.

Since Kabore took charge however, a jihadist offensive has advanced across the nation, igniting ethnic squabbles, claiming at least 1,100 lives and forcing nearly a million people from their homes.

Kabore's performance during this mounting crisis is now under scrutiny as the presidential ballot looms in November.

The grim public mood today is the polar opposite of the optimism that swept the country in 2015, of when Kabore rode to electoral triumph with more than 53 percent of the vote.

Nearly a third of the country's provinces are in a state of emergency, swathes of territory are de facto no-go areas, and more than 2,000 schools have closed.

The flow of foreign tourists has dried up, dealing a further blow to one of the world's weakest economies.

"The surge of attacks and rising violence are due to the fact that there hasn't been an appropriate response to the threat," said security expert Mahamoudou Savadogo.

But party leaders insist that 63-year-old Kabore is the best man for the job.

Kabore is also expected to secure the backing of a broad coalition of parties called the Alliance of Parties of the Presidential Alliance, or APMP.

In contrast, in one of the rare opinion polls to be conducted in Burkina Faso, a survey published last month by an NGO called the Centre for Democratic Governance (CGD), found 63 percent of respondents said they were "not satisfied" with Kabore's performance.

Social discontent and the coronavirus pandemic are other factors in his slump.

Kabore was close to former president Blaise Compaore, forced out in October 2014 by popular protests after 27 years in power.

Other big names likely to stand in the elections are also closely associated with the Compaore era.

They include former prime minister Kadre Desire Ouedraogo and Eddie Komboigo, who heads Compaore's party, the Congress for Democrats and Progress, which was excluded from the 2015 vote.

The crowded field is also likely to include opposition leader Zephirin Diabre, the runner-up in 2015, and Tahirou Barry, who stepped down as a minister in Kabore's first government.

Political analyst Drissa Traore said Kabore could point to some successes, notably in the development of Burkina's road network. But otherwise his record was sketchy.

"Even so, he remains the frontrunner, given the opposition's problems in uniting," Traore said.