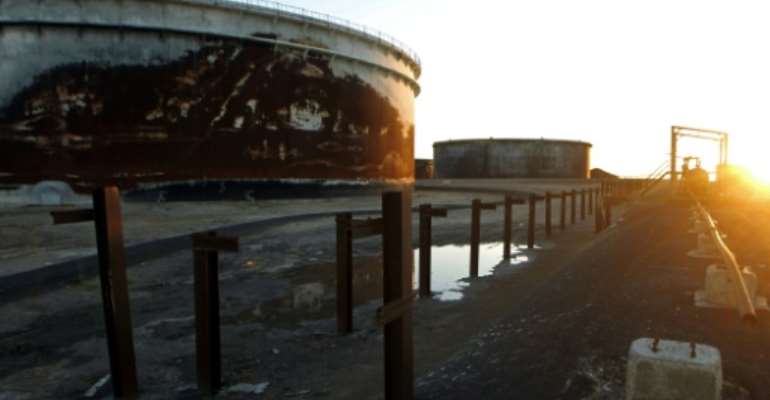 A first ship was due to start loading crude from the oil port Al-Sidra in the east of the country, Libya's National Oil Corporation said. By Abdullah DOMA (AFP/File)

Libya's National Oil Company announced Friday the resumption of crude production and exports after a nearly six-month shutdown due to conflict dividing the country.

But the state oil giant said that it would take time for output to return to previous levels because of major damage to energy infrastructure.

Libya, which sits atop Africa's largest proven crude oil reserves, is torn between the rival powers of the UN-recognised Government of National Accord (GNA) in Tripoli and eastern-based strongman Khalifa Haftar.

Since January, groups loyal to Haftar, who was pushing an offensive to seize the capital, have been blocking the production and export of oil from the country's most important fields and terminals, claiming they want a fair distribution of the oil revenues managed by Tripoli.

The NOC had invoked force majeure in response -- a measure used in exceptional circumstances that allows it to be exonerated from liability in the event of non-compliance with oil delivery contracts.

The company said Friday that it had "lifted force majeure on all oil exports from Libya".

"The increase in production will take a long time due to the significant damage to reservoirs and infrastructure caused by the illegal blockade imposed on January 17," it said in a statement.

NOC chief Mustafa Sanalla welcomed the resumption of oil production, saying: "We are very glad finally to be able to take this important step to national recovery."

The US embassy, which relocated to Tunis after its 2014 closure in Libya, also hailed news that the NOC had lifted force majeure "and resumed its vital work on behalf of all Libyans."

It vowed to cooperate with the UN mission in Libya to ensure "revenues are not misappropriated but rather preserved for the benefit of the Libyan people".

France's embassy, also from Tunis, stressed on Facebook it rejected "the militarisation of oil installations" and stressed "the importance of preserving NOC neutrality".

The NOC said a first ship was due to start loading crude from the oil port Al-Sidra in the east of the country.

Libya produced 1.22 million barrels per day (bpd) before January and had planned to increase production to 2.1 million bpd by 2024, the NOC said this week.

But due to infrastructure damage caused by the months-long blockade, production could drop to 650,000 bpd in 2022, it said.

Earlier this month, the NOC had reported talks, "supervised by the United Nations and the United States", to allow the resumption of production, the halt of which caused losses of more than $6.5 billion, according to the company.

Oil exports are the source of almost all state revenue in Libya, which has been mired in chaos since the ouster and killing of dictator Moamer Kadhafi in a 2011 NATO-backed uprising.

Supported by Turkey, pro-GNA forces scored important victories in June, regaining control of the northwest and driving out forces loyal to Haftar, who had launched an abortive offensive in April 2019 to seize Tripoli.

Haftar is backed by Egypt, the United Arab Emirates and Russia.

On July 1, the NOC said negotiations were under way "between the GNA, NOC and regional countries who stand behind this blockade" to resume production.

It said that "all oil revenues will continue to be deposited into the same accounts of the corporation", pending the establishment of measures along "two parallel tracks".

"One track will ensure financial transparency as well as equal opportunities and social justice among all Libyans," the statement said.

"The other track will focus on the restructuring of security arrangements to protect oil facilities, in a way that ensures they are never used as a military target or a political bargaining chip again."

The distribution of Libya's oil income is regularly the source of tension in the country, particularly in the east, which has repeatedly said the shares are inequitable.

Some Ghanaians in UK embark on walk to show support to Akufo...
19 minutes ago

Young Oswald whose ‘Our Day’ wishlist went viral dreams to b...
19 minutes ago