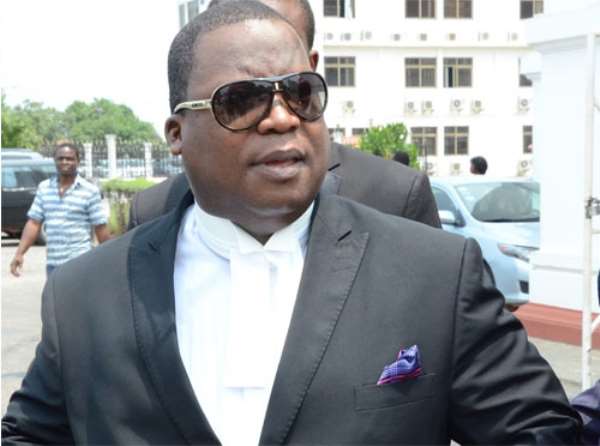 Key influential stakeholders in the NPP Akuapem North Constituency have vowed to stop Lawyer Phillip Addison over what they claimed is an attempt on his part to destroy the peace and development of the constituency.

This comes after Philip Addison allegedly sponsored 8 disgruntled members of the party to go to court to contest a decision taken by the NPP National Executive Committee.

The stakeholders insist that they are content with the developmental projects ongoing in the constituency and they will ensure that the MP for the area is retained as well as President Akuf-Addo to continue their good works.

The former's unsuccessful parliamentary candidate in the 2016 parliamentary elections in the Korle Klottey Constituency have allegedly teamed up with a section of his supporters to send the NPP to court.

A move that is seeking to annul the decision of the Vetting and Appeals Committee of the NPP and to prevent the duly elected parliamentary candidate from contesting.

It must be recalled that before the 2016 elections, Addison had used similar ’Rambo’ style of politics to cause disaffection and estrangement for the party in the Korle Klottey Constituency which led to the NPP losing woefully to the NDC.

To prevent similar fate, leading stakeholders in the Akuapem Constituency have vowed not to allow Addison to have his way this time around.

The stakeholders, consisting of the clergy, chiefs, assembly members, opinion leaders, and even members of the community have unanimously vowed not to allow Addison to bring such action on the development of the constituency, which has since time immemorial seen a peaceful political environment.

Unsatisfied by the outcome of both decisions, Philip Addison has through his supporters resorted to the law court, a decision that tends to jeopardise and plunge the constituency into a state apprehension.

Leading figures in the constituency have thus vowed not to allow what happened in Korle Klottey repeat itself in Akuapem North.

‘Sputnik-V procurement contract must be re-examined’ – Kwaku...
4 minutes ago

Getting Sputnik-V vaccines from black market using middlemen...
4 minutes ago