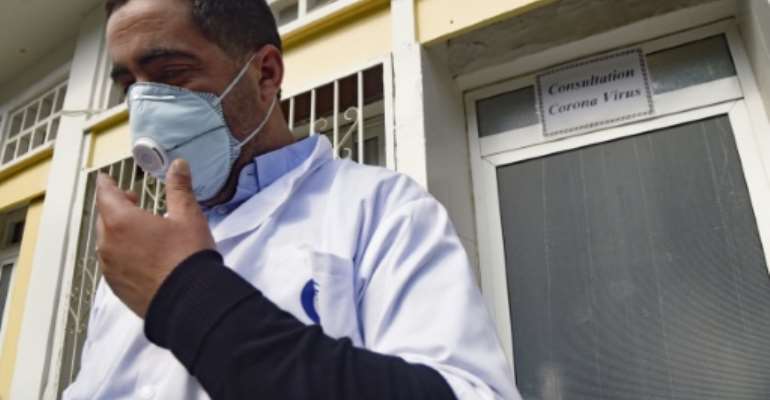 Algerian doctors and nurses say they have paid a heavy price in the country's coronavirus response and have warned of worse to come, urging respect and enforcement of hygiene rules.

"We're working non-stop. We're totally exhausted. Some (medics) are dead, may they rest in peace, and several members of my team have been infected," said Dr Mohamed Yousfi, head of infectiology at the Boufarik hospital near Algiers.

Boufarik was the first town in the North African country to register cases of the COVID-19 illness in February, after Algerians returned from France and attended a wedding and infected an entire family.

"The epidemic started here, and it's getting out of hand. The hospital is full," Yousfi said.

Some staff are so tired they have fainted or had car accidents, he said.

Doctors and nurses have been particularly at risk since the outbreak in February.

Local media report that 31 medical workers have died -- including four since the start of the week.

Professor Abdelkrim Soukehal, a member of the National Scientific Committee, said some 1,700 doctors, nurses and other medical workers have been infected.

Some doctors have taken to social media to voice anger and desperation, among them a doctor from second city Oran.

The doctor, signing with the initials M.A., tweeted about his pride for "my team, who were giving it their all" but also anger "at all those ignorant people who pay the price for their foolishness."

Others bemoaned the lack of ventilators and personal protective equipment, demanding more help from the state.

After peaking for a first time in April, coronavirus infections were markedly down during the Muslim fasting month of Ramadan.

But after it finished in late May, authorities began easing strict lockdown measures -- and the caseload surged again in hospitals across the country.

Yousfi said his hospital was full and that dozens of people, sometimes entire families, arrive each day with COVID-19 symptoms. Around half are declared positive.

The Pasteur Institute of Algeria, which carries out the tests, said it is overwhelmed, more than quadrupling its workload to more than 2,000 tests per day.

But Yousfi said many Algerians were not accepting the reality of the situation, with some continuing to deny the virus exists.

"As long as there are citizens in denial, selfish and unaware of the fact they're infecting people around them -- and of what the doctors are enduring because of them -- the situation can only get worse."

The worst-affected country in North Africa, Algeria has officially reported nearly 18,000 cases of COVID-19, including about 1,000 deaths.

A month after easing its initial lockdown, the government in late June urged local officials to act tougher against those breaking hygiene rules.

Algerians are required to wear masks in public and gatherings are banned.

Yousfi called for "targeted lockdowns" of areas with new outbreaks of the virus -- and more support for medical staff.

"The day the front line doctors can't do their work because of exhaustion, there will be no one left to care for the sick."

"I Appreciate Young Seidu Agongo, I Want To See Him Do Great...
1 hour ago