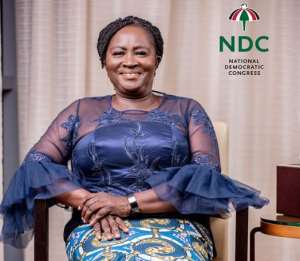 The New Patriotic Party (NPP) Chairman for the Madina Constituency, Eric Nartey Yeboah has said John Mahama’s running mate, Prof Naana Opoku-Agyemang lacks what it takes to complement her boss for the 2020 elections.

Eric Nartey Yeboah said the NDC should have selected a technocrat with economic and finance background considering the fact that the person will chair the Economic Management Team.

He believes the NDC has shot itself in the foot by selecting Prof. Opoku-Agyemang as the running mate for the December polls.

“As a minister, she scrapped teacher trainee allowance. Under her watch, teachers taught for 12 months and were paid only three months. Even common chalk which led to the famous statement by former second lady Mrs. Amissah-Arthur,” Eric Nartey Yeboah exclusively told Kwaku Owusu Adjei on ‘Pae Mu Ka’ on Accra-based Kingdom FM 107.7.

‘’The worst thing associated with her name is the Montie 3 saga. When the trio threatened death on some Supreme Court Justices, she was one of the people who joined the campaign and appended her signature to have the trio who had been incarcerated at the Nsawam Prison released against sound advice by well-meaning Ghanaians,’’ he added

According to him, teachers in the country suffered in the hands of the former Vice-chancellor when she served as minister of education in erstwhile Mahama administration.

Re-demarcate Aflao Lands - Togbui Fiti Over Encroachment Of ...
59 minutes ago

We Were Misled By False Social Media Information – Final Yea...
59 minutes ago