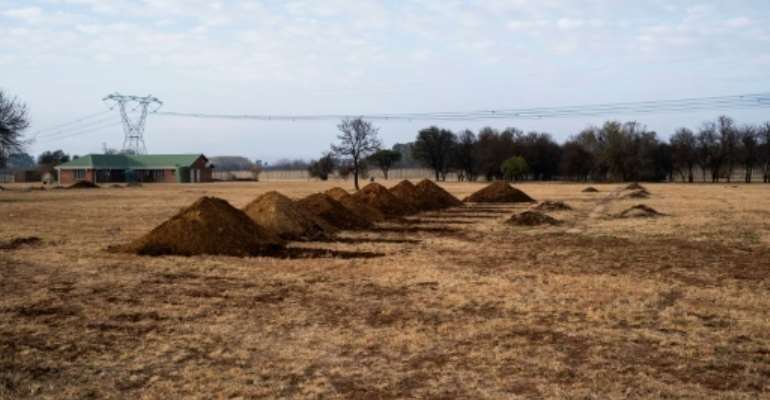 Mounds of soil mark where graves are dug for victims of coronavirus at the Honingnestkrans cemetery in Pretoria. By WIKUS DE WET (AFP)

South Africa authorities sought Thursday to calm fears over coronavirus deaths after health officials in the country's most-populated province said they were ready to bury more than a million people.

Excavators have this week sprung into action to dig long rows of graves in cemeteries throughout Gauteng, which includes the cities of Johannesburg and the capital Pretoria, for possible mass burials.

After performing inspections of burial sites in Pretoria, the provincial head of health, Bandile Masuku, said Wednesday that Gauteng was preparing over 1.5 million graves.

"All our municipalities have been putting up capacity and acquiring more in terms of the land that they'll need for burial," Masuku said.

His announcement triggered a wave of anxiety in the province, which has so far recorded 75,015 coronavirus cases and 478 deaths, overtaking the Western Cape province as the epicentre of the virus in South Africa.

Nationally, 3,602 deaths have been recorded to date.

Authorities have since been scrambling to ease public fears that the province could see such an explosion in coronavirus-related deaths.

"The province does not have over a million already open, dug graves," the provincial health department said in a statement released on Thursday.

"The (figure of) over a million graves refers to the collective capacity municipalities can take," it said.

The health department said the government was working to improve and increase both the health system's infrastructure and human resource capacity to deal with increasing pressure from the COVID-19 pandemic.

"Government's response to COVID-19 is informed by the imperative to prevent infections and SAVE lives," the minister of cooperative governance, Nkosazana Dlamini-Zuma, tweeted.

"We are NOT therefore expecting and preparing for 1 million COVID-19 related deaths in the country. #StaySafe". 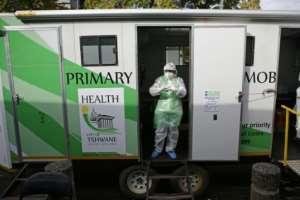 The health department said the government was working to improve and increase both the health system's infrastructure and human resource capacity. By Phill Magakoe (AFP/File)

Long contained by the strict lockdown imposed in late March on South Africa's 57 million citizens, the tally of coronavirus contaminations and deaths has begun to rocket.

More than 8,800 cases and 100 deaths were recorded on Wednesday. With more than 220,000 total infections and 3,600 deaths, South Africa is the most-affected country on the continent.

Despite the confinement, the hospital system in Africa's most-industrialised country is showing signs of buckling under the strain.

The much-feared "peak" of the health crisis seems to be approaching, and with it increases the concern of the authorities.

"The storm that we have consistently warned South Africans about is now arriving," Health Minister Zweli Mkhize told parliament on Wednesday.

"We are now at a point where it's our fathers, mothers, brothers, sisters, close friends and comrades that are infected," he said.

Despite field hospitals deployed by the military or NGOs, "bed capacity is still expected to be breached or overwhelmed in all the provinces," Mkhize warned.